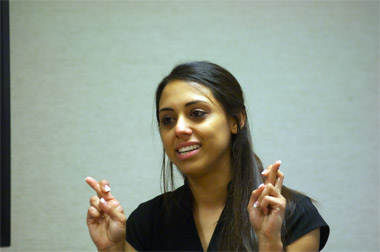 CARBONDALE, Ill. -- The high school student with dyslexia looked glum. On a test given at the beginning of the unit on human biology and reproduction, he’d gotten a D with a score of 38. After weeks of study, he got a D on the final, too.

Martinez, who says she herself doesn’t test well, is no stranger to bad grades. In fact, she earned straight Ds in one of her semesters at a community college up north. “I would sit at the back of the class, look at my watch, text and count down the seconds until it was time to get out of there,” recalled the Barrington native, who will graduate from Southern Illinois University Carbondale on Saturday, May 15, with a dual major in elementary and special education and an overall GPA of 3.4.

So Martinez had a certain sympathy for that student right from the start. But she also has come to believe, as a result of her student teaching experience, that her job is to discover what her students can do and build on that. “You can always find something good about them -- you focus on their strengths,” she said in her Capstone presentation, where she summed up for a College of Education and Human Services faculty panel what she has learned on the other side of the desk.

Given her family background, Martinez seemed destined to do well in school. Her father, Jesse Martinez, came to the United States at the age of 10 barely able to speak English yet managed to graduate from Judson College in Elgin with a business degree. He pressed her to get an education, to succeed. Her older sister is a registered nurse. But Martinez found class work dull. When she finished high school with a lackluster 2.6, her parents quashed her plans to attend Western Illinois University, insisting she prove herself in community college first.

But while Martinez continued slacking off in community college, she pushed herself in her off-campus job at a facility for children and adults with developmental disabilities, working first as an activity aide, then as a nursing assistant and finally as a developmental trainer. “I loved it there -- it was like a second home,” she said. She then discovered, during visits with friends attending SIUC, that the University had a well-regarded undergraduate degree in special education. With her eye on that degree, she got her community college grades up to a respectable 3.0 and transferred to Carbondale.

Nonetheless, those early bad grades followed her, bringing down her cumulative GPA and initially keeping her out of the teacher education program. Stuck with a load of general classes, Martinez began falling back into her slacker habits. Her first course in special education, taken during her second semester on campus, proved her saving grace.

“It was lively; it helped me see myself as a teacher even before I got into the classroom,” Martinez recalled. “I realized if I really wanted to be a teacher, I needed to get my act together, to buckle down. I started reading research articles, engaging in conversation in class. I started sitting up front, raising my hand, asking questions. In every class, I studied hard, I went in for extra help. I now have As in all my education courses but two -- I have Bs in them.”

Martinez got into the teacher education program, which mixes classroom learning with classroom teaching, in her fourth semester. While the program usually moves students gradually from weekly observations to daily instruction, the schoolteachers Martinez worked with involved her fully right from the start. She taught reading skills once a week to grade-schoolers in a special education classroom in Murphysboro. In Herrin, she taught high school students with behavioral and emotional disorders three days a week, which sharpened both her classroom management skills and her compassion.

“Everyone warned me that these were the kids you had to watch out for, but from my first day on, that wasn’t the case,” Martinez said. “They had their bad days, just like everybody else, but they were really sweet. I enjoyed that experience.”

Both settings brought home to her the worth of a concept called “co-teaching,” which teams special education teachers with their general education counterparts to keep students with special needs in classrooms with their peers.

“Nobody should have to go to the basement for an education,” Martinez said with some heat.

The desire to keep kids out of the basement led to her double major. “I thought that with degrees in both I would be able to provide a better education to all my students,” Martinez said.

Martinez’ full-time student teaching assignment took her to Johnston City, a town of fewer than 3,500 lying 17 miles northeast of Carbondale.

“I was a little nervous -- there’s not a lot of diversity there,” she said. “But everyone was so nice, there was so much support from the teachers, and the students were wonderful. There was a mix of general students and special education students. It was just what I was waiting for. I’m hoping every classroom will be like that.”

Martinez liked it so well, in fact, that she’s hoping her first job will take her back.

“I developed such a rapport with the students, the parents and the faculty -- I get text messages saying, ‘We’d love to have you here’ -- and I matured and excelled so much more than I ever imagined,” Martinez said.

“My parents would like me to come back ‘home’ to get a job, but though I’m far away from home, I feel like I have family here. It’s been a great experience.”