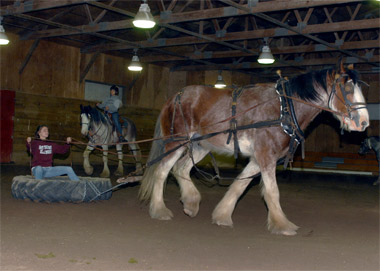 Buggy for Dale -- In Southern Illinois University Carbondale’s riding arena, Dale, a Clydesdale donated to the College of Agricultural Sciences’ horse program last fall, pulls a tractor tire as he trains for carriage work, while his brother Chip demonstrates his saddle skills. Students working with the pair hope to raise money for Dale’s buggy by featuring the horses in a Chip’n’Dale calendar. (Photo by Russell Bailey) Download Photo Here

CARBONDALE, Ill. -- Picture a Clydesdale -- or two -- dressed up as Cupid. It could happen if the equine science students at Southern Illinois University Carbondale have anything to say about it.

“The students want to create a Chip ‘n’ Dale calendar as a fundraiser with the horses dressed up to reflect the holiday of the month,” said equine science director Sheryl S. King, as she watched Chip and Dale, her new “gentle giants,” graze. “One of the big challenges we now have is finding equipment that will fit them -- Clydesdales don’t mature until they’re 5 years old (Chip is 1, Dale is 2), so they have a lot of growth left in them. I’m discovering that a Clydesdale carriage and saddles are quite expensive -- that’s one reason we’re looking at the calendar.”

Chip and Dale arrived on campus last fall, courtesy of Phil Farrell of Farrell Clydesdales, whose Decatur-based family has bred these huge horses for three generations and exports them all over the world.

“Phil has tried very hard to convince people that draft horses can do a lot more than pull carriages,” King said. “When he found out about our program and what our students do, he thought we would provide the perfect showcase. Our charge is to make them as versatile as they possibly can be. A lot of draft horses are used in jumping competitions, some people ride them dressage (the equivalent of horse gymnastics). We’re going to try for it all. We’re even going to try them with cattle, though I’m not sure how they’ll do as ‘cowboy’ horses.’”

This is where the students come in. Under the low-key tutelage of area “horse whisperer” and graduate student Mark W. Schwarm, 10 equine science majors have been engaged in what was known in a harsher era as “horse breaking” -- socializing the horses and teaching them to perform various tasks.

“We don’t make the horses do anything; we just let our ideas become their ideas,” Schwarm has said in describing his method. “I have learned that working from the horse’s idea is much easier. These particular guys are very massive and very strong so we try to get them to be willing. If they learn how to be with you rather than wanting to leave all the time, they’re more easy to work with.”

Schwarm found the pair -- full brothers -- a little “touchier” than he expected when they first arrived. “They’re timid -- they don’t know how big they are,” he said. “They’ve needed reassuring quite often. Chip’s a little easier; he seems to have a happy-go-lucky attitude, where Dale is a little more serious and reserved, but he has his own mind about how to do things. Dale being the older had more experience so he needed a little more reassuring. He’s a little bit more worried about whether things will be OK. But when he lets down, he gets soft and relaxed, and his eyes go soft and quiet.”

While both horses had done a little halter work before coming to SIUC, neither had been ridden, so Schwarm and his students started by getting them used to the saddle. “Dale had a hard time with that,” Schwarm recalled. “He would try to move out when we threw the saddle up. By the end of a session, all the students could saddle him, but the next time out, we had to start all over again. But it wasn’t as hard as the time before, and each time he got a little better.”

After the horses grew accustomed to the controlled environment of the Horse Center’s arena, Schwarm moved everyone outside. “I told the students, ‘If the horses need to go, just let them go -- of course, they couldn’t stop them anyway -- but when a horse feels like he can go if he needs to, he’s more likely to stay,” Schwarm said.

Though Schwarm considers the pair still “green,” Dale has moved beyond the saddle and is now willing -- when properly reassured — to pull a tractor tire, a first step in preparing him for carriage work. King has her eye on using the pair as ambassadors for her program, showing up at public events, pulling the carriage she hopes someone will donate if they don’t sell enough calendars to buy one themselves and giving folks rides.

Right now, Dale pulls the tractor tire in the Horse Center’s arena, smoothing it out for the students who take riding classes there. But Schwarm thinks, for the horse’s sake, he needs to take it to the next level, so he’s hoping they don’t have to wait for calendar sales to get there.

“Dale’s ready to go to town -- he needs a job to do,” Schwarm said as he watched the big horse move smoothly around the arena trailing the wheel behind him. “Dale needs a buggy.”