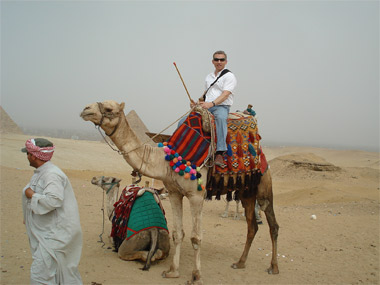 Going places -- With the Great Pyramids as a backdrop, Rob Lyerla hops the nearest camel. Lyerla, a captain in the U.S. Public Health Service and a two-degree graduate of Southern Illinois University Carbondale, will deliver the commencement address for the College of Education and Human Services May 15 as this year’s outstanding alumnus. (Photo provided) Download Photo Here

“A lot of things just happened -- they weren’t planned,” said Lyerla, a captain in the U.S. Public Health Service and the College of Education and Human Service’s pick for this year’s outstanding alumnus. He will speak at the college’s commencement ceremonies on Saturday, May 15. A two-degree graduate of the college -- he earned a master’s in educational psychology in 1984 and a doctorate in educational measurement and statistics in 1994 -- Lyerla specializes in studying and fighting epidemics.

While focusing largely on hepatitis and HIV/AIDS, he’s also tracked dengue fever and diphtheria, among other diseases, in a career that began with the Centers for Disease Control, moved on to the United Nations and has currently landed him at the National Institutes of Health, where he serves as acting director of the Fogarty International Center’s Division of International Relations.

Along the way he’s worked with dialysis patients, the homeless, drug users, prisoners, college students, Native Americans, gay men, and the heavily tattooed and pierced. He’s traveled from Iceland to India, Moldova to Morocco, Scotland to Siberia. “It’s been a path for me to go to different parts of the world, and I’ve done that quite a lot,” said Lyerla, who grew up in Columbia. “When I’m in the Kremlin or Kathmandu, I’m still kind of stunned by it. I never thought I would go there.”

A go-getter from the get-go, Lyerla left Bradley University with undergraduate degrees in both biology and chemistry -- he’d been thinking medical school when he made those choices -- and a minor case of burnout. He spent some time working at an archaeological dig as a chemist, had a gig as a camp counselor in Michigan’s Upper Peninsula and took a sort of sabbatical in Ann Arbor, working just enough to pay the bills.

“But I knew I wasn’t done, though I didn’t know what I wanted to do,” Lyerla said. “I could have gone to the University of Michigan, but I still had my Illinois residency and my parents (Harold and LaWanda Hartline Lyerla) were living in Alto Pass, so I thought, ‘I could go to SIU, get my academic chops back and apply to medical school there -- and I’d have a place to live.’”

Shortly after he arrived at SIUC, Lyerla landed a job as a hall director in the residence halls. Experiences there triggered a switch in interest from med school to ed psych. With his master’s complete, that “not done” feeling struck again. He decided to pursue a doctorate.

“I’d heard that statistics and measurement was a tough degree, so I thought, ‘Why not? Let’s see if it’s as tough as they say,’” he said. “It was the next big opportunity.” While working on his doctorate, he decided to study Russian as a sort of break from the labor of his dissertation. “I was within six credits of having a bachelor’s degree in Russian when I graduated, and that’s led into other things,” Lyerla said. “When I got to the CDC, my first assignment was to go to Russia because I had that background.”

Serendipity had cropped up in getting Lyerla to the CDC in the first place. An SIUC grad who worked there encouraged him to apply for a staff job. While that job was not, after all, available, his resume brought him to the attention of the CDC’s Epidemic Intelligence Service -- the U.S. Health Service’s “disease detectives” -- who showed particular interest in his unusual doctorate. Six months later, he was among the 60 applicants they accepted that year. “I was the first person to enter EIS in 20 years with statistics as my Ph.D.,” he said. “I learned after the fact that people apply for upwards of seven years to get in.”

In Russia, Lyerla was one of a team of four trying to discover why diphtheria, a bacterial respiratory infection rarely seen in this country, had struck nearly a quarter of a million people. The team discovered that many of the country’s doctors, in the interests of developing natural immunity, were telling their patients to avoid vaccines.

“Once they re-energized their immunization program, they got diphtheria under control,” said Lyerla, whose team won a government commendation for its work there.

After completing his two-year epidemiology training with the Intelligence Service, Lyerla joined the CDC’s Division of Viral Hepatitis, where he focused on identifying gaps in hepatitis immunization and management in those particularly at risk for contracting the disease. “I was the prison guy, the drug injection guy, the homeless guy,” Lyerla said. “I worked with marginalized groups. They weren’t the people with the loudest voices, but they were vulnerable. I had to convince people that providing a basic standard of care for them was the right thing to do.”

He was, he said, quite happy with this work, when the CDC asked him if he wanted to take over a slot in the Epidemiology and Analysis Division of the United Nations Joint Programme on HIV/AIDS based in Geneva, Switzerland. “I didn’t apply for the job, but I couldn’t think of any reason to not do it, and my friends said they’d jump at it, so I went,” Lyerla recalled.

During his five-year posting, Lyerla helped health officials in other countries improve their abilities to predict how, when and where HIV/AIDS would strike, to keep track of the disease as it progressed and to assess its potential and actual impacts.

“In many parts of the world, HIV/AIDS is still largely a disease affecting marginalized people, such as sex workers, drug users and homosexual men,” Lyerla said. “There are some countries where these marginalized groups aren’t just incarcerated, they risk being put to death, so it felt like pretty important work. I was part of a really great team, worked with a lot of really great people all over the world, and I think I helped set an agenda there and pushed the science and techniques along. But there’s still plenty of work to do -- it’s not finished.”

At the end of his stint with the U.N., Lyerla returned to the States, wondering about the next step. He knew statistics, he had epidemiology training, he had international experience. Was there some way he could combine the three, he wondered. Yes, there was, at a place called the Fogarty International Center, a Lyndon Johnson-era institution that focuses on global health research and initiatives. And a job was opening.

Lyerla got that job and after four months at the center was tapped as its acting division director for international relations. While he continues to serve on U.N. working groups concerned with HIV/AIDS, the new job has him working on ways to foster collaboration among international scientists interested in biomedical and behavior research and basic scientific discovery. “Boundaries disappear when you’re working with people who are interested in the same kinds of questions,” Lyerla said.

Though he’s years away from his school days, that old “not done” feeling has stuck around. “The job has been a good fit so far, but I’m not comfortable with administration being the only thing in my portfolio so I am pursuing other activities,” Lyerla said. He’s particularly interested in President Obama’s global health initiative and his plan for AIDS relief. “That’s kind of at the forefront of my thinking right now,” Lyerla said. “The world is a small place -- how can we make it better for everybody? Global health is a part of that. And HIV/AIDS is a big issue for everyone. More people are living longer with their disease, so the number of people who are sick is increasing. That means we have to find a way of getting a handle on how many new infections there are.”

While he has yet to settle on a particular direction, he has only to wait. No doubt serendipity, as it has so many times before, will take him there.