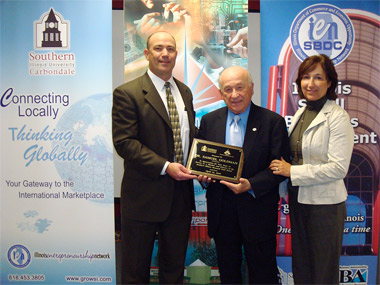 Honored -- Samuel Goldman (center), chancellor of Southern Illinois University Carbondale, receives a plaque from Kyle Harfst (left), executive director of the Southern Illinois Research Park, and Mary Kay Moore, outgoing chair of the park’s board. The board honored Goldman for his years of service on the board of directors while serving as chancellor and previously while a member of the SIU Board of Trustees. (Photo provided) Download Photo Here

CARBONDALE, Ill. -- Curtis Baird is the new chairman of the board of the Southern Illinois Research Park, located at Southern Illinois University Carbondale. In addition to election of officers, the board’s recent annual meeting included discussion of past successes and future plans and special recognition for a longtime proponent.

Special recognition went to Goldman during the meeting, noting his many years of service both on the board of directors while serving as chancellor and previously while a member of the SIU Board of Trustees. Rita Cheng, chancellor-designate, will move into Goldman’s seat after his May 31 retirement from the University.

The Small Business Incubator, a component of the Southern Illinois Research Park, began in 1990 with the mission of creating or nurturing startup and emerging businesses, Harfst said. Since that time, 89 potential businesses have leased spots -- some research projects, some created to work with government agencies or non-profit organizations, some that have gone on to become retail businesses. More than 50 are “graduates” as they’ve gone on to relocate and operate elsewhere as viable businesses, Harfst said.

There are now two buildings in the research park. There are 21 tenants along with the University’s Office of Economic and Regional Development. The Dunn-Richmond Economic Development Center houses 16 clients and the OERD while One Enterprise Place is home to six tenants. Since July 1, 2009, six new tenants have come aboard, with three of them being businesses based on intellectual property developed at SIUC, Harfst said.

But while plans are in the works for a 20th anniversary celebration later in 2010, Harfst said progress and expansion continue at the park. Thanks to a $1 million federal appropriation acquired through the efforts of Rep. Jerry Costello, D-Belleville, construction of a new interior roadway and expanded infrastructure is in the works. The design work is complete. Construction will likely begin later this year and should take about four months to complete.

“Ms. Moore has been instrumental in the progression of the Southern Illinois Research Park and has been a valued leader. Mr. Baird will continue this tradition as the interior roadway and next building are completed,” said Harfst.

For more information about the Southern Illinois Research Park and the opportunities it offers prospective or new businesses, contact Harfst at 618/453-3427 or by e-mail at harfst@biz.siu.edu.