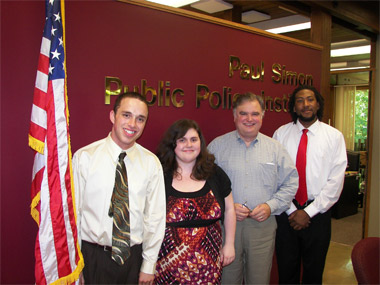 R. Mason Sloan, a graduating senior from Harrisburg, Sylvester D. Woodhouse, a junior from East St. Louis, and Cary A. Bryant, a graduate student from Centralia, received scholarships at a ceremony on Monday, May 3.

All three are part of the Institute’s Student Ambassador program, a group of students who help host the Institute’s speakers and events, and come together to learn more about public policy, politics and government through small group meetings and events with leaders in those fields.

“We are delighted to award the first scholarships in Mike Lawrence’s name,” said David Yepsen, institute director. “We are grateful to the scores of donors who have contributed more than $50,000 to the scholarship endowment that will enable us to help worthy students.”

Lawrence retired as Institute director in November 2008. The veteran newsman, press secretary and political analyst joined the Institute in 1997 as associate director, and became director in 2004 following the death of founder and former U.S. Sen. Paul Simon.

"I congratulate the scholarship winners,” said Lawrence. “I know each of them, and they are certainly worthy of this recognition and assistance."

Bryant is a graduate student in professional media management who has tirelessly worked on helping the Institute expand the scope and breadth of its online presence. She earned her bachelor’s degree in journalism, with an emphasis in digital communications, in 2009 from SIUC. She began her association with the Institute as a student employee and was later offered a graduate assistantship to totally revamp the Institute’s website, enhance its online presence and bring other digital media techniques to the Institute to help it better connect with students, donors and the general public.

Sloan is graduating with bachelor’s degrees in political science and in economics. He received the Presidential Volunteer Service Award by the President’s Council on Civic Participation to recognize volunteerism and community service on a national level, and is one of 25 SIUC students to receive 2010 Distinguished Senior Awards from the SIU Alumni Association and Student Alumni Council. He has been associated as a student volunteer with the Institute for most of his academic career at SIUC. In 2008, the Institute helped Sloan land a week long “externship” with the Southern Poverty Law Center in Montgomery, Ala.

Woodhouse is an undeclared junior who has been involved with the Institute since arriving on campus as a freshman in 2007. He was introduced to the Institute through friends who participated in the Institute’s Leadership Weekend for African American males from the East St. Louis region. Woodhouse has been a dedicated volunteer and has developed a strong passion for establishing a career in politics and public policy upon graduation. He recently participated in a student discussion at the Institute with U.S. Sen. Dick Durbin (D-IL) where his interest in politics was enhanced by connecting with Durbin, the Senate Majority Leader, who is an East St. Louis native.

Scholarship guidelines state that the recipients can be either graduate or undergraduate students who are involved in a substantial number of Institute programs, initiatives and other Institute-related volunteer opportunities and who have demonstrated positive leadership qualities. Other factors, such as service to other parts of campus or community, special challenges overcome by the students or financial need may be considered.

There is a preference that recipients are active in the Institute’s Student Ambassador Program and that they are African American.

Contributions may be made online at www.paulsimoninstitute.org, by sending a check to the Institute at 1231 Lincoln Drive, Mailcode 4429, Southern Illinois University, Carbondale, IL 62901 or contacting Matt Baughman, Institute associate director, at 618/453-4001 or baughman@siu.edu. More information on the Lawrence scholarships is also available by contacting Baughman.