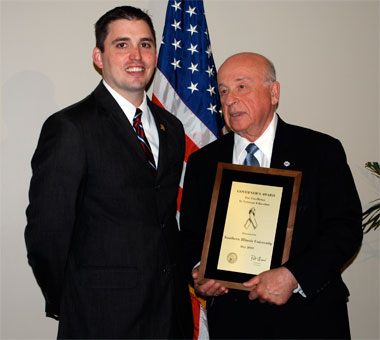 Statewide honor -- Dan Grant, left, director of the Illinois Department of Veterans’ Affairs, congratulates Chancellor Samuel Goldman after presenting the University with the inaugural Governor’s Award for Excellence in Veterans Education on Thursday, May 6, at the Student Health Center Auditorium. The award recognizes the University’s efforts in implementing the 2009 Veterans Higher Education Bill. (Photo by Andrea Hahn) Download Photo Here

CARBONDALE, Ill. -- The state of Illinois today (May 6) honored Southern Illinois University Carbondale for its efforts to enhance the educational experiences of student military veterans.

Dan Grant, director of the Illinois Department of Veterans’ Affairs, presented Chancellor Samuel Goldman with the inaugural Governor’s Award for Excellence in Veterans Education during ceremonies at the SIUC Student Health Center. The award recognizes the University’s efforts in implementing the 2009 Veterans Higher Education Bill, which is designed to “provide greater educational and informational resources for veterans attending public colleges and universities in Illinois,” according to the agency.

“On behalf of Governor Pat Quinn, we are thrilled to present the first Governor’s Award for Excellence in Veterans Education to Southern Illinois University Carbondale,” Grant said. “SIUC has shown exemplary leadership in creating a student Veterans Center that provides the resources and outreach that we envisioned when the 2009 Veterans Higher Education bill was passed.

“This award is a well-deserved honor for a school that has consistently been a leader not just locally, but nationwide, in providing resources and a welcoming environment for student veterans,” Grant said.

The University consistently ranks high among veterans-related magazines for its educational offering and services to 750 student veterans on the Carbondale campus and the approximately 1,400 active-duty military and veterans enrolled in 29 off-campus military base locations in the United States.

Among provisions in the legislation signed by Quinn in August 2009 is a requirement that schools create, publish and distribute a comprehensive guide of services available to veterans on campus, and also required schools with 1,000 or more full-time students to appoint a coordinator of Veterans and Military Personnel Student Services. There are 60 schools statewide with 1,000 or more full-time enrolled students that participate in the program, according to the Illinois Department of Veterans’ Affairs.

Grant said the University had already implemented many of its provisions before the legislation became law, and “has continued its highly effective and innovative approach to providing services and resources to veterans on campus.”

Goldman said the recognition is a reflection of the ongoing commitment to veterans shared by many people across the campus.

“We appreciate being the first recipient of this award from Gov. Quinn and Director Grant,” Goldman said. “It truly is a University-wide honor, because so many people work hard every day ensuring that our student veterans receive the help they need both in and out of the classroom. Our veterans and their families have made many sacrifices for all of us, and one of the ways we can show our appreciation is by helping them achieve their educational goals.”

Among the University’s efforts was the creation of the SIUC Veterans Center, which opened earlier this year in Woody Hall. The Veterans Center provides a wide array of information and services to student veterans, including insight into financial aid, admissions, academic and health resources, housing guides, and the University’s Disability Support Services’ Success Program for Veterans, which is partially funded by IDVA and the U.S. Department of Education Special Education and Rehabilitation.

Chris Piha, a senior in history from Carol Stream, is the Veterans Center coordinator. Piha, 26, came to SIUC after four years in the U.S. Air Force. He will graduate in December and earn his commission as an aircraft maintenance officer.

The transition from military life to one of a student can be difficult, he said. The Veterans Center helps alleviate some of those issues, Piha said, noting there is a large number of people at SIUC “who really, really care about veterans.”

But veterans, who are non-traditional students with unique backgrounds, still sometimes had difficulty locating answers and resources, Piha said. The Veterans Higher Education Bill “really gives veterans the tools they need to transition to the University,” he said.

“When we come here we are ready to do the work that is required to get our degree,” Piha said. “We just need a few additional resources that another student would have already received or wouldn’t be needed.”

Piha notes the number of veterans who attend SIUC and receive federally backed tuition from the newest G.I. Bill has risen from 70 to 150 this semester.

Piha’s staff includes approximately nine students who are all veterans, he said.

“We’re truly making an effort to make the veterans’ stay here at the University the best experience they can have,” he said. “We want to make sure they have the tools necessary to get their degrees.”

More than 100 student veterans have visited the office so far this semester with issues that range from questions about educational benefits, where to seek counseling for post-traumatic stress disorder, finding a tutor, and assistance with the Veterans’ Administration, Piha said.

In November, Military Advanced Education Magazine listed the University for a third consecutive year as one of the nation’s top military-friendly colleges and universities. SIUC is one of fewer than 30 universities and colleges to make the publication’s list all three years. In addition, the University’s efforts earned recognition as a “Military Friendly School for 2010,” from G.I. Jobs Magazine. That recognition places SIUC among the top 15 percent of 7,000 colleges, universities and trade schools in the nation, which, according to the magazine, “are doing the most to embrace America’s veterans as students.”

More information on SIUC’s Veterans Center is available at veterans.siuc.edu/ or by calling 618/453-1335.