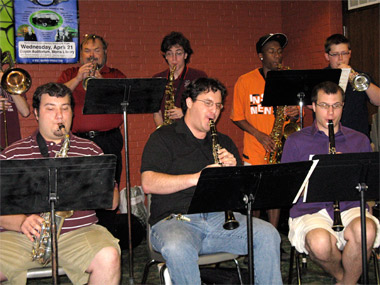 If you like polka, you’ll love the Polka Dawgs

CARBONDALE, Ill. -- The countdown began with a quiet “one, two, one, two” but in no time at all, lively music and people in motion filled the room. Southern Illinois University Carbondale’s very own Polka Dawgs were playing.

Conceived by Paul Sarvela, the SIU system vice president for academic affairs, “SIU’s unofficial polka band,” as he refers to it, is an ever-changing group. Sarvela says it’s an “invitation” band in that when he gets a request for Polka Dawg music, whether for a campus function or community event, he puts out the word through the School of Music and Edward Benyas, professor and director of the Southern Illinois Symphony Orchestra. The student musicians never fail him.

But why would a university administrator join up with students to make music just for kicks?

“Playing with students energizes you,” Sarvela says with a hearty laugh. “It gives you a creative outlet and a chance to have a good time with them. Polka music is just so approachable. It’s fun and there’s certainly nothing wrong with having fun.”

A walk through the Student Center a few years ago served as the inspiration for the band, Sarvela said. He heard a student “garage band” playing and thought how talented the young musicians were. A longtime trumpet player raised in Menominee on Michigan’s Upper Peninsula, Sarvela decided then and there that SIUC needed a polka band.

He contacted friends in the School of Music to see if students shared his interest and vision. They did and the Polka Dawgs were born. In the four or five years since, the Polka Dawgs have livened up many a gathering.

“I’m a tuba player so, of course, I love polka. It’s a lot of fun,” said Walter Lewis, a band veteran in his second year playing with the Polka Dawgs. A senior music education major from Aurora, Lewis said he always enjoys playing with Sarvela and the other students, whatever the venue.

Gavin Murphy, a senior tenor saxophone music and cinema major from Herrin, played with the Polka Dawgs for the first time during a recent Earth Day celebration at the Student Center.

“I was excited for the new experience,” Murphy said.

It also was Marissa Yancey’s first gig with the Polka Dawgs. The freshman music appreciation major from Herrin said she couldn’t refuse a chance to “experience the music and the ensemble interaction. Any opportunity to play is like an opportunity to grow.”

The Dawgs usually stick to the good old classic polkas, Sarvela said. Audience participation is highly encouraged and don’t be surprised if you see Sarvela put down his trumpet mid-song and belt out a line or two, perhaps even in German.

“Polka music is fun. People just can’t sit still when they hear it. This isn’t the kind of music you just sit and listen to. They’re tapping their feet, singing along, dancing. It’s enjoyable. And, it gives you a break from the regular day-to-day activities. In this day and age, who doesn’t appreciate that?” Sarvela said.

Sarvela holds three degrees from the University of Michigan (a 1984 doctorate in health education, a 1983 master’s in educational psychology and a 1981 bachelor’s in psychology). He arrived at SIUC as a professor in 1986 and has held a number of administrative positions since, including dean of the College of Applied Sciences and Arts, chair of the Department of Health Care Professions within that college and director of the Center for Rural Health and Social Service Development. He has been in his current position since late 2008 and loves maintaining personal contact with students.

“We have a good time together. And many of our alums have gone on to great things,” Sarvela said.

Sarvela played trumpet in high school, participated in summer programs at the Interlochen Center for the Arts and even played for a semester with the symphony band at the University of Michigan. Nowadays though, he said he’s happy to play second or even third trumpet.

“The old chops aren’t what they used to be,” he said with a laugh.

Previous music students at the University created the song arrangements the Polka Dawgs play. Sometimes Benyas plays with the band. On occasion, an SIUC graduate will join in too, as did local businessman Tim Feather on baritone during the Earth Day performance.

The musicians had just one short practice session before the April concert but sounded like they’d played together for years.

“These are very talented students. One run-through and they had it all down,” Sarvela said.

The Polka Dawgs sailed through “Pennsylvania Polka,” “Beer Barrel Polka” and yes, even “The Chicken Dance” -- which the crowd was happy to “flap their wings” and play along with.

“It’s just plain fun. It’s goofy. The music has a beat and you can dance to it,” said Sean Denison, a sophomore tuba player from Chicago majoring in music education.

Sarvela said it matters not who joins him for any given performance -- the result is always good music and a good time.