Francesca P. Gamber, a doctoral student in history, and Brendan P. Lutz won the award, which honors the top graduate student researcher at the University. Their achievement is part of SIUC’s annual Excellence Through Commitment Awards, which highlights top achievers at the University.

Chancellor Samuel Goldman will host a dinner in the winners’ honor today (April 20), where he will present each with a certificate.

The University established the Excellence Through Commitment program in 2003. The awards recognize excellence in the performance of its faculty, civil service, administrative/professional, graduate student, and student employees.

“We can measure Gamber’s impact from her first steps here at SIUC,” Bean wrote in his nomination letter. An honors graduate of Harvard University, Gamber followed her husband to the University while he pursued a doctoral degree, as well. A recipient of the Jack Kent Cook scholarship and others, Gamber became a role model and mentor to new graduate students and a volunteer writing fellow for undergraduates in several courses.

A talented writer, Gamber won the Stanley Zucker Prize at SIUC, which honors the best history student essay, taking on the subject of gender and Christmas, “written in her delightful prose,” Bean said.

“ In all of her writings, ‘Frankie’ avoids the jargon that deadens the writing of so many early scholars,” he said.

Gamber focuses her approach to studying history on the lives of individuals and communities, especially people of color traditionally excluded from historical writings.

“My work sees the everyday lives of non-elite Americans as deeply embedded in political history,” she said. “…Locating the voices of the everyday requires exploring unexpected places in the historical record: the songs and poems that Americans wrote about each other, the cultural representations of racial stereotypes that were popular because they reflected the anxieties and desires that stalked the neighborhood.”

Lutz earned his Bachelor of Science degree in geology 2006 at SIUC and stayed at the University to earn a master’s degree in the subject in 2008. He currently is pursuing his doctorate in environmental resources and policies at SIUC.

As a potential three-degree SIUC scholar, Lutz has been an outstanding student and serves as a perfect example of academic excellence translating to research distinction, said Scott E. Ishman, associate professor of geology at SIUC, who worked with Lutz as both his master’s degree adviser and as his current doctorate adviser.

“Through his (master’s) research and now his dissertation research Brendan has evolved into an excellent researcher,” Ishman wrote in Lutz’s nomination letter. “…Brendan has demonstrated a wide breadth of understanding regarding the responsibility of research scientists, particularly in the area of geosciences. I predict Brendan will be a shining star in the paleooceanographic community once receiving his Ph.D. but also believe that he will be a great ambassador for the geosciences because of his understanding of the social obligation we have and the importance of conveying our message in the public forum.”

Lutz focuses his research on the use of planktonic foraminifera as paleooceanographic and paleoclimate tracers, as well as other climate change science such as the influence of low-latitude ocean characteristics on global climate and Northern Hemisphere ice sheets.

“I view scientific research as an investment in the development of our understanding of Earth as a system,” Lutz said. “(It) has a responsibility to objectively provide society with the most detailed science possible, while addressing critical intellectual and social issues.” 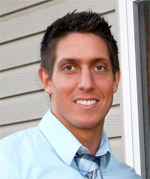