CARBONDALE, Ill. -- It’s the art, but not just the art. It’s also the presentation, the planning, the utilization of space, that makes a Rickert-Ziebold Trust Award recipient stand out from peer artists.

This year, two senior art students shared the honor of the award, one of the most prestigious available from the School of Art and Design at Southern Illinois University Carbondale. They are Logan Hirsh, a metal- and blacksmith student from Austin, Texas, and Beth Porter, a communication design student from Equality.

Porter’s two-part exhibit featured her design and marketing campaign for two fictitious companies, Coba Valley bath and spa products, and the Soothing System. She said one project began as a class assignment and the other is part of her thesis. Her exhibit demonstrated her ability to use a variety of media to create a recognizable brand.

Naturally, her first phone call was to her parents. She didn’t get them on the first try, but pointed out that their stylized images are part of her Soothing Systems exhibit. She hopes to enter the professional world of design upon graduation, and is presently looking at design agencies. The money from the trust award, she said, gives her a little bit of a cushion, and of course will enhance her resume.

Hirsh said he came to SIUC specifically because of the metalsmithing and blacksmithing program, which he praised as not only tops in the nation but also well placed geographically to put students in easy contact with leading professionals in the field. His own post-graduation plans include an internship at the National Ornamental Metal Museum in Memphis.

Hirsh’s exhibit included a handful of major metal pieces, some freestanding, some wall mounts. He said he’d begun working on the project several years ago, and was able to finish one major piece a semester, along with other, smaller work. Part of his exhibit consideration, he said, was lighting, or more to the point, the shadow cast by the sculpture.

Erin Palmer, associate professor in the School of Art and Design and coordinator of the event this year, said the act of participating in the competition is as much a learning experience as the creation of the art itself. This year, more than 30 students submitted work as digital images, but only 16 became finalists. The finalists had a relatively short timeframe to check out their assigned gallery space and determine how they would set up their exhibit.

“This is the first exhibit event for many of these students, and they have a lot to figure out,” she said. “They have to anticipate how they will fit their exhibit into their space, how they will light it, how long it will take to install the exhibit -- they only have one day to install it. They are learning what they need to do to present themselves professionally.”

Palmer referred to a glass student who mapped out her wall mount with nails and a paper map before she began her installation. Another, she said, had to decide how to hang his project so it would rest at the angle he wanted. Another had to decide how a tall exhibit would hold the track lighting.

“Just having this space here at the Surplus Gallery allows the students to grow,” she said. “The space and this competitive award are special advantages we have here.”

The Rickert-Ziebold Trust Award offers a substantial cash award. This year, because of the economic climate, the trust did not yield quite what it has in the past. Donations and other fundraisers, however, brought the award to $15,000, which is close to the traditional amount of the award.

The Rickert-Ziebold Trust Award honors the late Joseph Rickert, a prominent lawyer and state senator from Waterloo, and a patron of the arts. His family established the award in 1974. 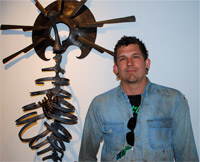 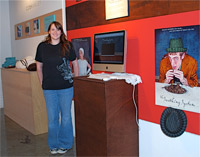