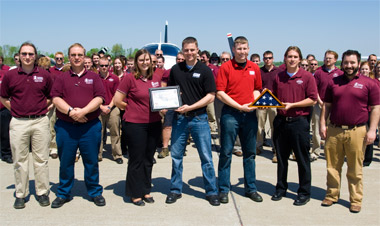 Special presentation -- Because of its support for its students who also serve in the military, Southern Illinois University Carbondale’s aviation program on Wednesday received an American flag and certificate from two students who served in Afghanistan with the Illinois National Guard. Sean M. MacDermott, a junior in aviation management from Hamilton, and Kyle A. Schneider, a sophomore from Springfield, presented the program with an American flag flown from a Chinook CH-47D twin rotor helicopter while over the Pech Valley in Afghanistan. Among the instructors who assisted MacDermott (black shirt) and Schneider (red shirt) prior to their deployment and upon their return are, from left: Bryan T. Harrison, assistant chief flight instructor and senior lecturer;Kevin M. Krongos, assistant instructor; Sabrina J. Zwego, assistant instructor;Matthew S. Albano, assistant instructor; and Christopher J. Dimoulis, visiting assistant instructor. (Photo by Steve Buhman) Download Photo Here

CARBONDALE, Ill. -- The Southern Illinois University Carbondale aviation program received an honor earlier this week for its support of two students who recently returned from serving in Afghanistan.

“This is definitely a thank-you from us,” said MacDermott, a 22-year-old junior in aviation management from Hamilton, near Macomb. “One of the major changes since 9/11 is how well the public supports the troops. This is kind of our way of saying ‘thank you’ back. If I’m in uniform I can hardly go anywhere without someone thanking me.

“This is the same thing. They supported me and we cannot make it without the support of friends, family, strangers and the people we work for,” he said.

Schneider, a 22-year-old sophomore in aviation technologies, is from Springfield. MacDermott and Schneider served as flight engineers on the Chinook helicopter. The pair deployed with the Illinois Army National Guard’s Company B, 2/238th general support aviation brigade out of Peoria. MacDermott will be with the Illinois Army National Guard for six years in November; Schneider has been with the Guard for five years.

Schneider said the recognition is due the aviation program because of the cooperation and assistance the two soldiers received in leaving and then returning to the program “and picking up right where we left off.”

David A NewMyer, chair of the Department of Aviation Management and Flight, said the department and College of Applied Sciences and Arts are keenly aware of the sacrifices made. Gerald Thornhill, an assistant chief flight instructor in aviation flight is currently on deployment with the U.S. Army, and Chris Barber, a flight instructor, just returned from a deployment with the U.S. Air Force, NewMyer said.

“We are very mindful that we have students defending the nation and going out in harm’s way almost all the time from our college,” NewMyer said.

NewMyer said that interim Dean Terry A. Owens estimates that between 100 and 150 students enrolled in CASA programs either at SIUC or one of the college’s off-campus programs are deployed to Iraq, Afghanistan, and other locations at any given time.

“We want to support them,” NewMyer said.