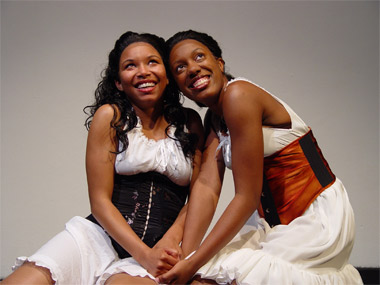 Laura Kidd, assistant professor in fashion design and merchandising, delivers a pre-show lecture prior to the Sunday performance, beginning at 1:30 p.m. in the College of Mass Communication and Media Arts Dean’s Conference Room. The lecture is free and open to the public.

The play, set in the shifting cityscape of 1905 New York City, tells the story of Esther Wills, a black seamstress who earns her living by creating ladies undergarments. Lonely Esther begins a correspondence romance with a man working on the Panama Canal. However, falling in love through letters can be a tricky business. When the man arrives in the city for marriage, Esther discovers he is not the person she thought he was, and her dreams for love and a new life seem to unravel at the seams.

“What I love about this play is Esther’s persevering sense of hope and spirit,” said Susan Patrick Benson, director and assistant professor of voice in the Department of Theater. “Everyone has obstacles in life, and everyone has sadness. How we deal with life’s obstacles is the essence of who we are, it is the fabric of our character. This play is set in a time and an era in which a woman, even more so a single black woman, has limited means to support herself. In spite of the circumstances of her life, when Esther encounters adversity, she refuses to let it keep her down. She chooses to be happy and to succeed.”

The Baltimore Stage co-commissioned “Intimate Apparel” with the South Coast Repertory Theater in Costa Mesa, Calif. The play debuted in Baltimore in 2003, then appeared later that year in Costa Mesa. The play had a successful off-Broadway run in 2004 starring Viola Davis.

Tickets are $15 for general admission, $12 for senior citizens and $6 for students. Get tickets in advance at the McLeod box office in the Communications Building from noon to 5:30 p.m., Monday through Friday.