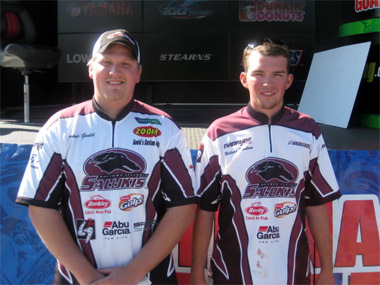 But, the Southern Illinois University Carbondale fishermen don’t want to be talking about the one that got away after the weekend of April 10-12. Rather, they hope to tell the story of the fish that won them a $100,000 prize package and a chance at a half-million bucks.

The two will be competing in the inaugural National Guard College Fishing National Championship, hosted by the University of Tennessee in Knoxville. They earned the opportunity to compete by virtue of a fourth place finish in the National Guard College Fishing Regional Championship at Kentucky Lake earlier this school year. They earned $8,000 in prize monies at the regionals, split by the University and their Registered Student Organization, the Saluki Bassers. SIUC got part of the winnings and the club is using the remainder to fund tournament participation and also a recent veterans fishing tournament.

Viewers can see the tournament nationally on Versus. The top 25 teams from universities and colleges across the U.S. will compete at Fort Loudoun Lake. If Dunham and Gould win, SIUC will get a $50,000 and the Saluki Bassers will receive $25,000 and a Ranger 177TR boat. And, Gould and Dunham will advance to the Forrest Wood Cup in Atlanta Aug. 5-8, where they could win $500,000.

“Richard and Travis are skilled and dedicated anglers. They’ve done their homework and have an excellent chance of doing well at the tournament,” said Edward J. Heist, associate professor of zoology and faculty adviser for the Saluki Bassers RSO.

Dunham, a senior business entrepreneurship major from Waukegan, has fished since he could walk, he said, winning his first fishing derby at the age of five with a five-pound catfish. The son of Bill and Teddi Dunham, he will graduate in May. Gould, a recent radiologic sciences graduate from Vandalia, has likewise fished since he was quite young. The son of Ron and Tena Gould, he’s still fishing under the SIUC banner because he was a student when the qualifying tournament action began.

The two were excited when they arrived at Kentucky Lake for the regionals and saw 20 boats, lined up, fully equipped and ready to fish. Within minutes on the water, they had landed their first “keeper.” At the end of the day they were in seventh place with about seven pounds, but on the second day, they caught nothing of sufficient size until nearly noon. At day’s end though, they were up to 10 pounds and fourth place. On day three, they caught nearly 60 fish. Unfortunately, only two were big enough to keep and totaled three pounds. All told, Dunham said they caught more than 100 fish, the vast majority returned to the water, but at the final weigh-in, they held onto fourth place.

“I feel great about how we finished. I would have loved to win the regional, but we got to the next step and that is all that really mattered to me. I think we have a good shot at the championship. We have been studying hard for this -- looking at maps and talking to the people about the lake should help out. We think that the fish will be spawning so sight fishing will probably play a big role in what we do. We’re hoping to be able to catch some post and pre-spawn fish also,” Dunham said.

“It’s an amazing feeling knowing that we are one of the best 25 teams in the nation. But now, we’re in it to win!” Dunham said. “The whole series, we just wanted to get to the next step and now that we’re going to nationals, we want to win and move on to the Forrest Wood Cup. We’re not going to be fishing for second. In my eyes, that would be a loss. The Forrest Wood Cup is one of the most prestigious tournaments in the world. The tournament is on Lake Lanier in Georgia. If we qualify, I will be moving down to Georgia and living with my sister and fishing the lake every day. Making it to that tournament would give me a great shot at going pro straight out of college. This championship is potentially a life-changing event. All of my practice, hard work and determination have come down to this one tournament. I really hope we come out on top of this thing. It is inconceivable how much it would mean to me if I won.”

Gould concurred that thus far, the goal has just been advancing in the tournament but said now, “We need to finish in the top spot. It was a great feeling to know we had made it to nationals. I didn’t care what place we finished as long as we were going to nationals. Day two was such a rollercoaster day, when we saw that we stayed in the top five we were ecstatic. But now, I want to win nationals. There’s no ‘top five moves on’ in this one so we need to go for the win.”

Getting the chance to compete at the Forrest Wood Cup would “be one of the most amazing things ever,” Gould said. “Just the chance to interact with the people fishing in that tournament would be amazing. It would be like getting to play an MLB game with your favorite team or play an entire game in any high-level sport with the people you grew up watching and idolizing. Simply put, it would be amazing. But that is pretty well what this entire journey as been about up to this point. “

You can see Dunham and Gould’s profiles on www.CollegeFishing.com. In addition, “FLW Outdoors” magazine, in its January/February issue, named SIUC one of the top bass fishing colleges in the country. Dunham actually begs to differ, saying he thinks SIUC should be on the top 10 list because it’s a good University and fishing program with a lot of great fishing areas in and around campus. Sponsors such as Tackle Warehouse, Dobyns Rods, Strike King Lures and Lake Fork Tackle are invaluable to the team, Dunham said.