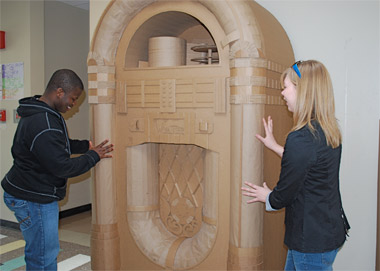 CARBONDALE, Ill. -- Everything is bigger -- half again the normal size in fact -- at the newest restaurant on the campus of Southern Illinois University Carbondale.

But you won’t be placing large orders there because Walt’s Diner, inside Quigley Hall, is actually a giant replica of a 50’s diner made entirely from corrugated cardboard and brown paper. The grand opening of the diner is set for noon Wednesday, April 7, in the south entrance of Quigley Hall.

A surprise guest, wearing a cardboard chef’s hat and apron of course, will use corrugated cardboard scissors to cut the ribbon, launching the premier of the collaborative project by first-year architecture and interior design students. The public is welcome.

Reporters, photographers and news crews are welcome to cover the ribbon cutting at noon Wednesday, April 7, at Walt’s Diner, located in the south hallway of Quigley Hall. For more information or to make arrangements to visit at another time, call the School of Architecture at 618/453-3734 or e-mail Peter Smith at smithpbs03@yahoo.com.

The students have used about 5,000 square feet of cardboard and 800 yards of brown craft paper to sculpt every component, including the giant jukebox, the wall pay phone, cash register, pies, and even a bus boy tub complete with dirty plates and cockroaches. Wearing her poodle skirt, the roller-skating, pony-tailed waitress Betty seems to have tripped. Giant cardboard French fries and burgers with all the fixings fly through the air as she starts to fall. There’s a custom logo for the diner too, showcased on signs and on the 63-inch high counter, some 28 linear feet long and all meticulously “tiled.”

A 1957 Cadillac crashes through one wall of the diner, too. It’s an amazingly realistic scene, albeit in tones of brown. The details are intricate, right down to the holes in the salt and pepper shakers, the delicate stack of pancakes and the assorted bristled cleaning equipment.

The exhibit, named in honor of Walter Wendler, director of the architecture school, wasn’t just for fun though. Students spent hundreds of hours on the assignment as they learned important lessons about scale and re-creating objects, first on paper as drawings and then as detailed three-dimensional cardboard depictions.

The process of creating a detailed drawing of the front end of “Caddy” and seeing it progress to “looking like it does now” has been both fun and a great education, said Ryan Henry, a freshman from Gurnee. Henry and Alan Cation, a sophomore from Springfield, were helping set their car in place, pointing out the accuracy, right down to the bullhorns on top.

All four freshman design classes collaborated on the project, with two students from each group coming together as the “team of eight.” The team of eight served as the steering committee to orchestrate seamless completion of a cohesive project.

“It’s been a lot of fun but a lot of work. This has been a scale and transition problem. We just made it more fun. They had to measure, translate into dynamic drawings with shade and shadow and then figure out how to recreate it on a bigger scale and in a site specific way. They also had to work together in small groups and as a whole team and they did it very well. This diner is absolutely beautiful,” said Peter Smith, associate professor of architecture. He and Dave White, associate professor of architecture, are the faculty directing students in the diner project.

The diner will be in place through April 28. Stop by and take a gander at dining 1950’s style, via cardboard re-creation. Smith said the entire design is purposely such that walking through the hallway immerses you in the scale and character of the monochromatic yet realistic super-sized diner. You can even sit in one of the cardboard booths and pose for a photo.

Smith said a Facebook page is in the works where anyone can post pictures of their visit to the diner. Walt’s Diner will move to the Student Center April 29, appearing in conjunction with the Fashion Design and Merchandising senior fashion show.

For more information about the SIUC School of Architecture or Walt’s Diner, call 618/453-3734 or e-mail smithpbs03@yahoo.com.