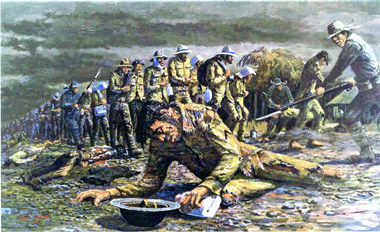 Bataan Death March -- This sketch, by Ben Steele, a Bataan Death March survivor from Montana, depicts the circumstances that prisoners of war faced during the 65-mile march in spring 1942. The sketch is part of Jan Thompson’s upcoming documentary on the fall of the Philippines to the Japanese and the Bataan Death March. Download Photo Here

Survivors tell the story of 'The Tragedy of Bataan'

CARBONDALE, Ill. -- A first-person documentary that airs next week on WSIU TV and WSIU-FM will focus on the horrors of the fall of the Philippines to the Japanese and the Bataan Death March in the spring of 1942.

Jan Thompson, an associate professor in Southern Illinois University Carbondale’s Department of Radio-Television, produced “The Tragedy of Bataan,” which is the first in a three-part series. Subsequent programs will look at the prisoner of war experience, and “hell ships,” the unmarked Japanese ships used in transporting American POWs to Japan and China as slave labor, she said.

For more information on the documentary or to arrange interviews with Jan Thompson, contact Monica Tichenor, public information and promotions coordinator for WSIU Public Broadcasting, at 618/453-6160.

The story of Bataan, the Death March, and the circumstances surrounding a three-and-a-half-year ordeal for those captured, is an important but little noticed part of America’s history, said Thompson. Her father was a POW but was not in the Bataan Death March.

“It’s a small slice of history but it is an important piece of history because it did happen to America,” said Thompson, who interviewed more than 65 veterans during the last 17 years for the series. The first part features first-hand accounts from 15 Bataan survivors, including then 101-year-old Albert Brown of Pinckneyville. Now 104, Brown remains the oldest living survivor of Bataan.

“To me, it is unconscionable that we should forget this slice of history,” Thompson said. “I think people are well aware what happened in Europe and the atrocities and cruelty that happened there. But they really don’t understand what was happening in the Pacific. The Bataan Death March is just one. There are countless other death marches that happened.”

Captured on the nearby island of Corregidor, Thompson’s father, a medical corpsman, remained reticent and “very protective” of how much he shared with his daughter when she began attending POW conventions in the early 1990s, she said.

As she started to meet other POWs, Thompson said the importance of allowing everyone a chance to tell their story became apparent to her.

“There are no academics or historians. This is truly to me what a documentary should be all about on topics like this, if possible. You have eyewitnesses telling you what it was like to be in these unfortunate circumstances,” Thompson said.

The largest surrender in U.S. military history, the story of Bataan is one of men whose forced surrender came after non-stop fighting for several weeks with reduced rations and no reinforcements or additional supplies. Gen. Edward P. King, Jr. surrendered the troops after Gen. Douglas MacArthur left the Philippines for Australia, and did so without informing the general left in MacArthur’s command.

Even after surviving horrific conditions, those who remained still love their country, Thompson said.

“When you meet these men you are in awe that they still love their country; they still love what the flag represents, which is freedom,” she said. “These guys are true heroes. They are incredible heroes, true warriors, those who gave, as Abraham Lincoln said, the ‘last full measure of devotion’ to their country.”

Even with all the research, Thompson said it was only a few months ago that she discovered a “nugget of gold” -- survivor Albert Brown’s diary of the ordeal. She uses his diary throughout the documentary and radio pieces. Jim Gee, WSIU-TV news director, reads Brown’s diary excerpts.

“What is interesting about the diary is you can see the cynicism and the dark humor starting to surface because part of the survival mechanism in the prison camp was the dark humor,” Thompson said. “You can really tell what is going on with these diary entries. Albert Brown is very, very powerful for someone who is 101.”

The documentary shows the POWs’ vivid memories, including fears of execution after surrender. Two soldiers recall during the march seeing a dead soldier who had become just a spread-eagle imprint splotch on the ground. The body was about an inch flat because trucks repeatedly ran over him, Thompson said.

Thompson’s father is still alive, but more than half of the veterans interviewed are deceased, she said. In doing her research, Thompson came upon footage in the National Archives in Washington, D.C., of her father, clearly looking into the camera during the liberation of his prison camp in September 1945.

“We are pleased to have the opportunity to premiere ‘The Tragedy of Bataan TV documentary and radio series on WSIU,” said Greg Petrowich, executive director of WSIU Public Broadcasting. “These programs are an exact mission match for public broadcasting.

"Jan Thompson has created a distinctive body of work, which we've been fortunate to air over the years. To work with her on bringing this very personal story to our viewers and listeners is an honor for WSIU."

In addition to learning more about “this forgotten corner of American history,” Thompson hopes viewers and listeners appreciate the story of courage and survival by young Americans, and that heroism “isn’t confined to fighting forces, but by those forced to serve in other ways.”

“This is a story of true patriotism; the will to survive in order to serve the nation,” she said.

Thompson is the president of the Descendants Group, a non-profit auxiliary of the American Defenders of Bataan and Corregidor. The convention, hosted by the POWs’ descendants, is next week in Reno, Nev. The organization’s mission is education and ensuring that the legacy of what the POWs endured remains vivid, she said.

The two remaining segments in the series are nearly complete. Thompson hopes to generate national interest in the series in time for Veteran’s Day.

“It’s a labor of love. Even when I get these done I will probably not be done I have so much material,” she said. One of the reasons the documentary took so long is due to the amount of material and trying to determine how to present it in the best way, she said.

“I always had in the back of my mind it has to be these guys telling their story,” she said.

Thompson will discuss the documentary series on WSIU InFocus, which runs Friday, April 9, at 9 p.m. The documentary, “Tragedy of Bataan,” follows at 9:30 p.m. A rebroadcast of the InFocus interview and documentary begins at 12:30 p.m., Sunday, April 11. 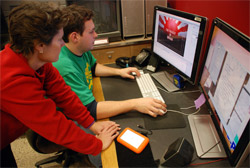 The Tragedy of Bataan -- Jan Thompson,
an associate professor in Southern
Illinois University Carbondale's
Department of Radio-Television,
foreground, and SIUC student Tommy
Lareau work on a segment for the
first of Thompson's three-part
documentary, "The Tragedy of
Bataan." Thompson interviewed more
than 65 veterans in the past 17
years. The first part airs at
9:30 p.m., Friday, April 9, on
WSIU TV. In addition, five
segments, each about six minutes
long, will air daily on WSIU-FM
at 6:30 a.m. and 8:30 a.m.
starting Monday, April 5,
through Friday, April 9. Lareau
is a senior in radio-television
from Watseka. (Photo provided)
Download Photo Here