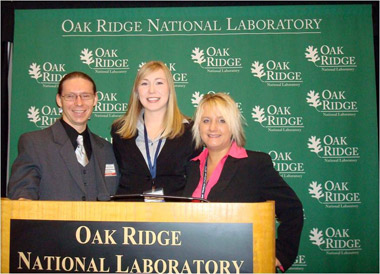 ‘Smelling’ victory -- Student members of the Southern Illinois University Carbondale team that recently brought home a top prize in a national technology innovation contest celebrate their success. The team won fourth place among 22 finalists from five countries in the Global Venture Challenge 2010, a contest based at Oak Ridge National Laboratory. Team members are, from left, Evgheni Strelcov, a doctoral student in physics from Chisinau, Republic of Moldova; Renee Favreau, of Carbondale, a senior in marketing; and Gina Montgomery, of Pinckneyville, a senior in industrial design. (Photo provided) Download Photo Here

The team won fourth place at the Global Venture Challenge 2010, a contest based at Oak Ridge National Laboratory. The SIUC team was one of just 22 finalists from five countries competing for cash prizes at the contest, aimed at finding innovative ideas from graduate students to address the world’s needs for energy and security.

The team pitched the so-called “nanoscopic electronic nose,” a device in which tiny nano-scale wires stand in for the biological smell detector cells present in a mammal’s nose. Because of their tiny size and chemical reactivity, nanowires can detect extremely small concentrations of chemicals in the parts-per-billion range. Sensors based on this technology also are extremely stable and power efficient.

When assembled in arrays of sensors and coordinated by software, such sensors can form a sort of electronic nose that can send detailed information about the environment. Applications might include very small, power-efficient sensors that can send doctors real-time information about a patient’s blood glucose level, for example, or lead to improved radio frequency identification tags -- often used in the retail sales industry, but with many other potential applications -- that can sniff the air for explosives or other chemicals.

Several team members made the trip to Oak Ridge for the competition, held March 25-26, giving presentations to three panels of judges that included venture capitalists, scientists, administrators and other leaders before making it into the finals. The fourth-place finish came with a $1,000 cash prize.

Stlecov said the process was thrilling as the SIUC team competed against larger institutions such as Purdue University, the University of Maryland, Carnegie Mellon University and others.

“I consider it to be a significant success, as neither I, nor Renee nor Jenni have had before any experience with such contests,” Stlecov said. “We had only 10 minutes to explain what our product is and its advantages, and we had to answer a lot of questions about it. And for all this, we did make it to the finals with some very positive feedback from the judges, which is due to our huge advantage -- a combination of efforts of both scientists and business-oriented team members.”

Janssen said she was extremely proud of the team for its hard work and success.

“They were competing against some of the top schools in the United States and worldwide and came back to SIUC with a fourth-place finish,” she said. “This is a big accomplishment not just for the Center for Innovation, but for SIUC as a whole.”

The contest featured new technology in energy and security divisions. With the electronic nose’s potential as a potent bomb-sniffer, for example, SIUC competed in the Community Resilience and Homeland Security Showcase. That division highlighted technologies that enhance the ability of communities to rapidly recover from natural and man-made disasters.

Stlecov said the device is not yet ready for market, which is one reason they didn’t finish even higher. One day, however, he sees such nanoscopic electronic noses greatly strengthening security systems in places such as airports.

“However tired I have been, I still enjoyed every minute spent at Oak Ridge,” he said. “It was the first time I participated in such a contest, and I learned a lot. It significantly expanded my universe. It was a great honor.”