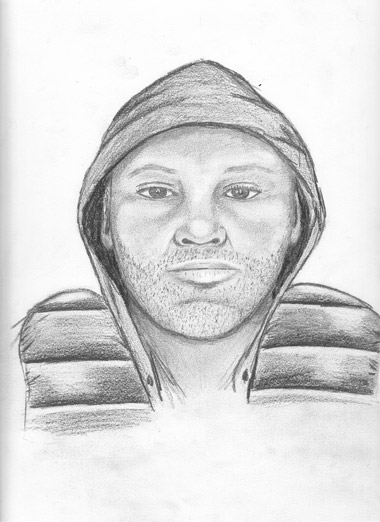 CARBONDALE, Ill. -- The Southern Illinois University Carbondale Department of Public Safety released a composite sketch of a suspect in the armed robbery of an SIUC student earlier this week.

The suspect is sought in connection with the March 22 armed robbery that occurred at 9:30 p.m. along Wham Drive near Lot 29, south of Wham Education Building and near Jean Stehr Field.

The 21-year-old victim told police he was walking west on Wham Drive when he was approached from behind. The suspect displayed a handgun and demanded the victim’s property. The victim surrendered his wallet, cellular telephone and iPod. The suspect then told the victim to turn and run. The victim ran and contacted police. He was uninjured.

The suspect is described as a black male in his late 20s to early 30s, about 6 feet, 1 inch tall, and weighing about 240 pounds. He was wearing a black, hooded sweatshirt, puffy black sleeveless vest, and blue jeans, with tan or golden flames on the rear pockets.

Anyone with information about the incident should call the SIUC Department of Public Safety at 618/453-3771 or the Crime Stopper Line at 618/549-COPS.

Police remind members of the campus community to use Saluki Express, Night Safety Transit Service and Brightway Path when traveling at night. In addition, emergency call phones are located across campus, including on both overpasses. SIUC police also have a “Campus Crime Watch” Web page that allows people to also anonymously provide police with information about a crime or non-emergency suspicious activity. Go to http://www.dps.siu.edu/campuswatch/ to send an anonymous email to police.