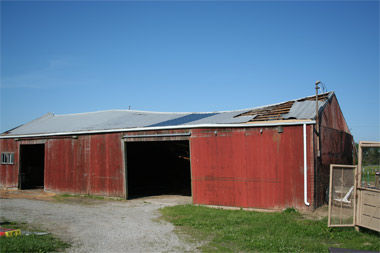 CARBONDALE, Ill. -- Destroyed by a storm that ripped through the Southern Illinois University Carbondale campus last May, a horse barn used for teaching, research and breeding will finally be replaced, thanks to a state trade group.

The Illinois Equine Industry Research and Promotion Board will pay for 25 percent of the rebuilding project, estimated by the Federal Emergency Management Agency to cost roughly $65,000. FEMA previously had agreed to pick up 75 percent of the replacement cost.

“The lack of that barn has put a huge crimp in our program,” equine science head Sheryl S. King said.

“After the storm, we had to shift teaching and research to our other facilities. They are in use from 7:30 a.m. to 6 p.m. five days a week, which meant the only time we could breed horses was after hours.”

With the barn restoration covered, King can use donations from Purina and private companies, which poured in immediately after the storm, to begin replacing fencing.

“We lost seven and a half miles of fencing, which really crippled us,” King said.

“How do you feed horses if you can’t turn them out to pasture because you can’t keep them in?”

King hopes that construction will start on the new barn this summer.

“Because we have the money in hand, we can ‘move up in the line’ and get our project going sooner. While the new barn won’t help us this breeding season, which is already under way, I hope by the start of the next breeding season in January, everything will be ready.”

King said the barn was the only University Farms building damaged by the storm to receive outside funding.

“The promotion board voted unanimously to grant the full amount of my request, and I was told by the chairman that a lot of extremely flattering things were said during the discussion about the equine science program,” King said. “It was very nice.”