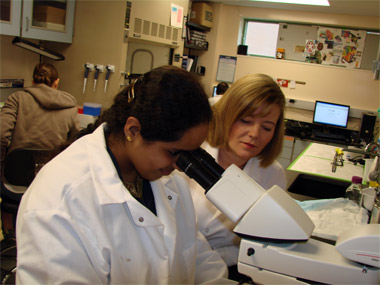 Looking for answers -- April D. Strader, right, assistant professor of physiology at Southern Illinois University Carbondale, works with Shwetha Ravichandran, a graduate student, as they examine microscope slides in Strader’s laboratory. Strader hopes to find out why gastric bypass surgery has such a rapid and profound positive effect on people suffering from Type II diabetes, one of the most prolific and damaging health issues in America today. She recently received a received a two-year, $745,000 grant from the National Institutes of Health to fund her research. (Photo by Tim Crosby) Download Photo Here

CARBONDALE, Ill -- Gastric bypass surgery, thought of by many as the last hope of morbidly obese people for losing weight, has many other benefits researchers are only beginning to understand.

One of those researchers, an assistant professor of physiology at Southern Illinois University Carbondale, is hoping to find out why this surgery has such a rapid and profound positive effect on Type II diabetes, one of the most prolific and damaging health issues in America today. And the federal government is backing her research with a large and prestigious grant.

April Strader recently received a two-year, $745,000 grant from the National Institutes of Health, through the American Recovery and Reinvestment Act, to find out why the anatomical rearrangement that defines gastric bypass surgery almost immediately sends Type II diabetes into remission. Strader won a Challenge Grant; one of just 400 that NIH awarded out of 30,000 applications.

Doctors and researchers have known since the procedure’s invention in 1967 that gastric bypass leads to dramatic weight loss in most patients. For decades, they associated the seemingly simultaneous remission of the patients’ Type II diabetes with the weight loss, which takes place over months and even years.

In the 1990s, however, researchers began to realize that the Type II diabetes remission happened within days of the surgery, indicating something else besides the slower-occurring weight loss was responsible for this phenomenon.

The surgery changes the order in which food moves through the gastrointestinal tract, and causes the body to secrete hormones in different quantities and at different locations than under normal conditions. Strader believes this change in hormone secretions is the key to sending the Type II diabetes into remission.

If researchers can understand how this complex process works, it could lead to new drugs and therapies that could cure Type II diabetes without surgery.

“The goal of my research is to figure out how these surgical procedures are causing such dramatic and immediate metabolic improvements in patients that are so amazing,” Strader said. “If we can learn these things, we can ultimately design a pill or a combination therapy that people can use instead of having surgery that will mimic its effects.”

Obesity and Type II diabetes go hand-in-hand and are near epidemic levels in the United States alone. The government estimates more than 21 million people suffer from the affliction, which is characterized by high blood glucose and resistance to insulin, a hormone created in the pancreas that allows glucose to enter cells where it can be used for energy. The disease can lead to many other health problems and can be fatal.

To explore this issue, Strader has used the grant to hire a seven-person staff of students and full-time laboratory workers, as wells as purchase new high-tech equipment for rapid DNA sequencing.

The main thrust of the research is based on rats, which stand in for the human patients. She and other staff members operate on the rats, giving them a certain type surgery that changes the order of digestive organs while studying the results of different variables.

Strader and her staff perform what is known as an ileal ointerposition operation on the rats, whereby she removes 10 centimeters of small intestine near its distal end and reattaches one end to the animal’s duodenum and the other end to the jejunum. Following this rearrangement, food will pass through the stomach as normal before passing into duodenum and into the displaced portion of intestine, which normally handles food that is much more digested.

Unlike a typical gastric bypass in humans, the rats’ GI tracts remain the same overall size and length -- about 100 centimeters. Only the order is changed.

“My hypothesis is that we will see hypersecretion of beneficial hormones under these conditions,” she said, as this surgical procedure improves Type II diabetes in rats and has become a novel surgical procedure used on human patients.

“Now we know this anatomical rearrangement perhaps stimulates different areas of the gut with more concentrated food and that this causes a stimulation of a bunch of hormones that we now know are present in these areas, which we knew nothing about in 1967,” Strader said. “And so it was sort of serendipitous.”

Part of Strader’s research focuses on one such hormone, known as glucagon-like peptide 1 or GLP-1. Strader jokingly calls it “the best hormone in the world” because of its many positive effects.

GLP-1 stimulates the creation of more pancreatic beta cells, which produce insulin, as well as making other tissues more sensitive to its effects. It inhibits glucagon production, lowering blood glucose levels associated with Type II diabetes and can also cross over into the brain and increase satiety, or the feeling of decreased appetite one gets of being full. It also slows the rate at which food moves through the GI tract, stabilizing blood glucose levels and again inhibiting over-eating.

“It can do so many great things for people,” she said. “It’s an awesome hormone.”

Strader also is examining the role bile plays in resolving Type II diabetes. Secreted by the liver, bile normally is taken back up through the small intestine and re-circulated to the liver. Research has shown, however, that patients who take anti-cholesterol drugs, which work by binding with bile and preventing recirculation to the liver, also have improved Type II diabetes conditions.

For Strader, this just illustrates the complexity of the process.

“There’s no one single factor that is causing the resolution of the diabetes,” she said. “It has to be a combination of numerous things, probably in hormones being changed and secreted from different parts of the intestine. And it’s probably the way that bile is being changed and altered in its uptake throughout the gut, and probably other things, too.”

Gastric bypass surgery is not the answer for every patient who suffers from obesity and Type II diabetes, Strader said, making the need for her research aimed at finding pharmaceutical or other therapies all the more important, along with diet and exercise. She does hopes her work will convince insurance companies to pay for gastric bypass surgeries in appropriate cases as a means of not only improving their clients’ health, but also saving money. A typical surgery costs $20,000 to $30,000, she said.

“But if you add up the lifetime of drugs these people will need to be on without the surgery, their need to take them for lipid disorders, hypertension, diabetes, arthritis and such, plus doctor visits, they save money by paying for a simple operation like this,” she said.