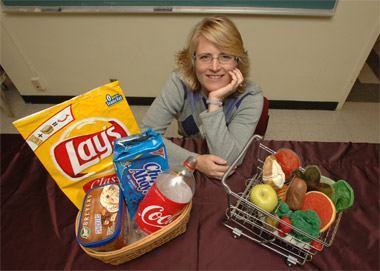 CARBONDALE, Ill. -- Everyone knows that the high cost of fruits and vegetables puts a healthy diet out of reach in these hard economic times. And everyone’s wrong.

“A grocery basket that contains a two-liter bottle of soda, a 16-ounce bag of chips, a one-pound bag of cookies and a half-gallon of ice cream costs the same as a cart full of 10 pounds of fresh produce — $11.35,” said Sharon L. Peterson, a registered dietitian and assistant professor of community nutrition at Southern Illinois University Carbondale.

“If you took the same amount of money you’re spending on empty-calorie junk food and spent it on fresh produce instead, you’d have a healthier diet, and you’d probably lose weight. There have been studies published where that’s been the case.”

Peterson, who said this kind of re-education has become a passion for her, will talk about healthy eating strategies at the Southern Illinois Men’s Health Conference, which runs from 7 a.m. to 1:30 p.m. this Saturday at Building C on the John A. Logan College campus. (For more information on the conference, visit www.w4hw.com/mhc.html.) Peterson and her students also will staff a conference exhibit chock full of nutritional tips, including the calorie count of various alcoholic beverages. (Hint: Choose the wine.)

Peterson acknowledges that at first a household switching from junk food to fresh will spend more.

“You’ll have to invest in staples and spices and stocks, but after that it won’t cost more and could even cost less,” she said.

Conquering the grocery store is still only half the battle when it comes to healthy, cheap eats. People also need to rethink eating out— a practice that affects both wallet and waistline.

“Whenever someone else prepares and serves the food, it’s going to cost more,” Peterson noted. “A family of four can easily spend $45 at a mid-level, sit-down restaurant — that could buy a lot of groceries.

“People think, ‘Well, we’ll go to McDonald’s and order off the dollar menu.’ But even if each member of that same family has just a small hamburger, drink and fries, they’ll still pay $3.31 per person. In cost studies done in our research group, we’ve shown you can purchase spaghetti sauce, a pound of noodles, extra lean ground beef and green beans and pay $5.41 total for a family of four — about $1.35 per person.”

Dining out has another downside. Not only does food served on someone else’s plates cost more, there’s generally too much of it.

“Restaurant portions are between two and six times more food than we need,” Peterson said. “When you eat more than you need, you gain weight.”

Because restaurants save food prep time, they prove a tempting option to households of one or two and overscheduled families. For these folks, Peterson recommends what she calls “a nice compromise:” frozen entrees such as Healthy Choice, Lean Cuisine and Smart Ones.

“They save time compared to cooking from scratch, and they save money compared to eating out,” she said.

For everyone else, she urges two courses of action. First, look at your week’s grocery bill and add up the amount you spent on soda, chips, snack cakes, cookies, candy and other such food items. Multiply that by 52 to get a handle on what you spend each year. Second, keep track for a week of how much you pay at the convenience store, coffee shop, drive-through and restaurant, and then multiply that total by 52.

“Awareness of these two spending patterns may shock you into a real consideration of whether that’s what you want to keep doing,” Peterson said.

“You may want to think about redirecting that money in healthier ways. But even if you don’t, I want you to understand that it doesn’t have to cost more to buy healthy foods. I want you to make an informed decision.”