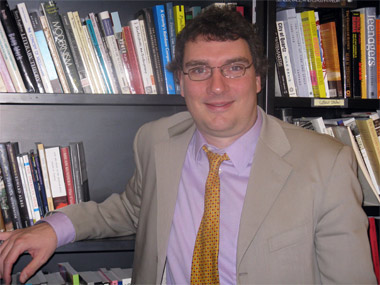 Job on campus/department you work in: Chair of the Department of Cinema and Photography

How long at SIUC: Six months

When you were a youngster, what did you want to be when you grew up? A physicist like Albert Einstein.

If you could choose another profession, what would it be and why? Stand-up comedian. I tell my students being a great teacher is 90 percent stand-up comedy and 10 percent ability to convert complex ideas into comprehensible English. I’m certainly less funny than Jerry Seinfeld, but you’d never hear him start a bit with, “What’s the deal with Jacques Derrida.”

What is something you still want to accomplish in life? I’d like to publish a book that more than 500 people might read.

People don’t know that you … Once worked as an engineer on a liquid nitrogen-submerged computer.

Who inspired you and how? Stephen Tapscott, a poet at MIT. When I told him that I wanted to go to graduate school in film studies, he didn’t laugh and kick me out of his office. Professor Tapscott’s passion for literature is what I use as a model every time I step into a classroom. He once made me sing an Irish folk ballad, “Four Green Fields,” while all I wanted to do was write about the films of John Ford. Now that’s a great teacher.

What was the first “album” you ever bought, and was it an LP, 8-track or CD? The soundtrack to “Hair,” on 8-track.

If you could pick an actor/actress to play you in a movie, who would you pick, and why? John Cusack: he’s smart, I’m smarter, but he has better hair.

Cats or dogs? Cats, because of their complete indifference to my existence.

Favorite cartoon character? Professor Frink from “The Simpsons” because he can invent time machines and be geekier than Jerry Lewis.

What would you like your gravestone to say about you? He helped more people than he hurt, by two orders of magnitude.