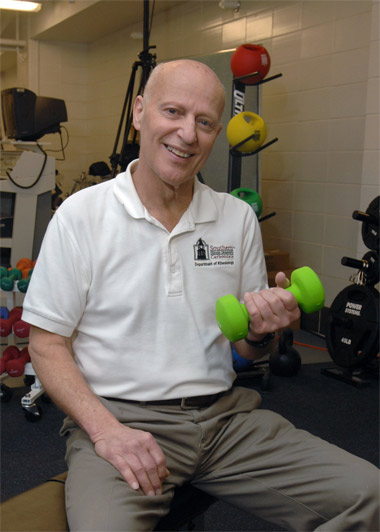 CARBONDALE, Ill. -- Longtime health and fitness advocate Tony Calabrese, a kinesiology instructor at Southern Illinois University Carbondale, will receive the second Champions Award from the steering committee organizing the region’s annual Southern Illinois Men’s Health Conference. He will be honored Saturday, March 20, at the luncheon that caps off this year’s conference, which will take place at John A. Logan College in Carterville.

The Champions Award, consisting of a plaque and a donation to the charity of the winner’s choice, recognizes men who demonstrate a commitment to health and wellness, mentor and inspire others, and display positive attitudes despite experience with serious illness. Former SIUC football coach Jerry Kill won the inaugural award last year.

Calabrese, a two-degree graduate of SIUC, spent 30 years as a high school physical education teacher and coach at Glenbrook South High School in Glenview. After his retirement in 1994, he moved back to this area and embarked on a second career with his alma mater.

In the years since, Calabrese has taught classes in physical fitness, individual and team sports, elementary and secondary methods, volleyball, special populations and teambuilding. He won recognition as the SIUC College of Education and Human Services outstanding non-tenure track faculty member in 2007.

“Tony has mentored hundreds of students and instilled outstanding physical education values and an enthusiasm for health and fitness that cannot be matched,” wrote colleague Philip M. Anton in his letter nominating Calabrese for the Champion Award.

“Touch of Nature has improved the lives of many young people and adults over the years, and Tony’s contributions are a huge part of that,” Anton wrote.

A Cobden resident, Calabrese coached volleyball at both Anna Junior High and Anna-Jonesboro High School, inspiring more students than can be counted, Anton wrote. He was a three-time “Coach of the Year” and has been inducted into the state’s coaching Hall of Fame.

Calabrese’s other honors include recognition as the state and Midwestern PE Teacher of the Year and the Teachers of Experiential Adventure Methodology’s servant leadership award.

Having a father, two brothers, a sister, 11 cousins and a niece afflicted with muscular dystrophy made it easy to decide where to donate the cash portion of his award, Calabrese said. That connection to illness plus his own unexpected heart surgery two years ago have given him the desire to help others as much as possible as payback for the gift of still being around.

To those others, he offers some succinct advice: “Get out and do something,” he urges. “You never know what might happen.”