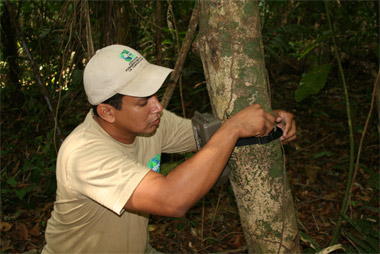 Say ‘cheese’ -- A wildlife surveyor in Panama working with researchers from Southern Illinois University Carbondale installs a motion-activated camera on a tree in that country’s Soberania National Park. The lush jungle-like area is the site of a new effort by Associate Professor Andrew Carver and Assistant Professor Clay Nielsen s to study wildlife and pass their scientific survey methods to local biologists. Working with local biologists from two local conservation groups, the SIUC researchers helped set up 45 of the cameras near trails and other areas thought to be frequented by the some of the park’s top predator and prey species. Mounted on trees, the cameras act as automated sentinels, popping off digital date/time-stamped pictures when an animal activates its built-in motion sensor. (Photo provided) Download Photo Here

CARBONDALE, Ill. -- One of Panama’s lush jungle-like national parks is the site of a new effort by Southern Illinois University Carbondale researchers to study wildlife and pass their scientific survey methods to local biologists.

Andrew Carver, associate professor of forestry, and Clay Nielsen, assistant professor with the Cooperative Wildlife Research Laboratory and the Department of Forestry, are collaborating on the project, which involves surveying the biodiversity in Soberania National Park. The two researchers are expanding the research project they began there about five years ago. They recently returned from a trip to the park, which lies near the Panama Canal and only about 10 miles from Panama City, the country’s capital city and home to about 1.2 million people.

Working with local biologists from two local conservation groups, the two helped set up 45 specially designed cameras near trails and other areas thought to be frequented by some of the park’s top predator and prey species. Mounted on trees, the cameras act as automated sentinels, popping off digital date/time-stamped pictures when an animal activates its built-in motion sensor.

National park rangers and local biologists, who work with the Panamerican Conservation Association and Panama’s Summit Zoo and Botanical Gardens, will check the cameras once each month, downloading the pictures and sending them to Nielsen and Carver, who will build a database they hope will provide a window of understanding of animal populations there.

“Our research philosophy is really sensitive to local needs,” Carver said. “The Panamanians are our partners in the project.”

Panama’s overall location, at the bottleneck separating North and South America, makes it a vital link between wildlife habitats on both continents. While forests in Panama are important for conservation, the forests in Soberania National Park have been kept largely intact due in part to their importance to the Panama Canal. The canal operates using fresh water runoff from the surrounding forest watersheds.

Soberania National Park contains an amazing spectrum of animal life, Carver said. An area of the nearby canal and watershed the size of Jackson County in Illinois, for instance, contains almost as many different bird species as all of North America. Tourism is a major economic player in Panama, and that includes so-called ecotourism. With its semi-tropical climate and its many hiking, biking and birding trails, Soberania National Park is a popular destination.

“Panama is such a small country and it is so accessible. You don’t have to trek out into the bush for days to find biodiversity there,” Carver said. “Ecotourism is a chunk of the tourism trade in Panama. We need to manage those parks for wildlife as well as recreation.”

Ocelots, a bobcat-like creature, are one of the predators the researchers hope to capture on digital cameras. It’s possible they will find jaguars, as well.

“They’re not known to be in that park but there are some wilderness areas where it wouldn’t surprise me if we saw a jaguar or two,” Nielsen said.

Panama faces several challenges when it comes to managing and protecting its wildlife areas and animals, however. This particular park, for instance, also is home to local people who lived there before the government created the park or even moved in unnoticed later. The people, who raise crops and domesticated animals, can occasionally clash with wildlife and interrupt its natural activities. Poaching is also a problem.

Also, local biologists don’t have access to the training and equipment available to researchers in the United States. A major goal for the SIUC researchers is to help train the local biologists in modern survey techniques and eventually secure additional funding to support graduate students and purchase more equipment.

“We are training the local biologists to do this kind of work,” Nielsen said. “Doing wildlife and biodiversity surveys will help them understand the kind of species they have and their local abundance.”

The SIUC researchers are planning another trip to the area over spring break. Their long-term goal is to gain funding for larger studies aimed at assessing and managing wildlife populations for the good of the country.

The researchers also hope their efforts will lead to offering a class for undergraduate and graduate SIUC students that will allow them to travel to Panama for a weeklong intensive research project that will give them experience in survey methods.

“This park is one of the most popular and prominent parks in Panama. If they know there are important or endangered species there, local authorities will do their best to manage those properly,” Nielsen said.