The six flight instructors will also compete in familiar surroundings during a portion of the 2010 Air Race Classic because Southern Illinois Airport is one of the competition’s eight legs and check-in points. The 34th annual Air Race Classic covers 2,157.7 nautical miles in four days, June 22-25. The event begins in Ft. Myers, Fla., and will end in Frederick, Md.

Sabrina Zwego, an assistant flight instructor, knew from an early age that she wanted to be a pilot and follow the course of Earhart and other notable women aviators. Earhart was one of 20 women to compete in the first Women’s Air Derby in 1929.

“I’m really excited that I get to compete in this because of what this trip represents -- of being able to do something that Amelia Earhart did at one time,” Zwego said. “A lot of us view Amelia Earhart as a pioneer; everything she did to allow me to have the career that I have today is just amazing. To be able to now compete in something she actually did when it was formerly known as the Powder Puff Derby is an amazing experience.”

The goal is for three SIUC teams to compete, with each team comprised of a pilot and co-pilot, said David A. NewMyer, department chair. The teams are starting work on fundraising and securing sponsorships. Tax-deductible donations may be made through the SIU Foundation. NewMyer estimates it will cost $4,000 to $5,000 per team for meals, lodging and expenses over the 10-day event, which includes pre- and post-race activities. The University is responsible for the three Cessna 172R planes and maintenance for the competition.

Safety is “stressed above everything else,” said associate professor Lorelei Ruiz, who is assisting with logistical issues. Competitors fly VFR, or visual flight rules, during the day. If the weather isn’t good competitors are not supposed to fly and they must be on the ground at one of the stops by sunset, she said.

According to the Air Race Classic Web site, each plane receives a handicap speed with the goal “to have the actual ground speed be as far over the handicap speed as possible.” That gives pilots the opportunity to wait for better flying conditions with the goal being to fly “the perfect cross-country.”

Having the University’s nationally recognized aviation program compete with other collegiate programs in this event is important, Ruiz said.

“It’s going to be good to get our planes out there -- not only for the students who are currently here, but who knows who might see our planes along the way?” she said.

Each of the three SIUC teams will also have a Facebook page, Ruiz said.

Because of the opportunities available in the aviation profession it’s important to attract more girls, she said. About 15 percent of SIUC students who begin in the aviation flight program are women, which is a little higher than the national average.

“This allows us to celebrate the involvement of women in aviation and in our case, it’s going to allow us to demonstrate the involvement that women have in delivering our aviation flight program,” NewMyer said. “The goal of the Air Race Classic is to show just how important women are to aviation, that they can play an expanded role, and have been demonstrating that for years.”

NewMyer also sees the competition as a way to advertise the program to areas including Florida, Maryland, and the East Coast.

While some of the teams might just stop briefly to check in before heading to the next leg in Elkhart, Ind., some competitors will spend the night when they arrive in Southern Illinois. Hearing stories from long-time competitors and seeing the variety of planes they will fly is fascinating, said Ruiz, who was a race volunteer about 20 years ago when the route included a stop in Mount Vernon.

Pre-race planning is already under way, said Zwego, who expects her Flying Saluki experience to help. She expects a long couple of months as she and Heidinger formulate their plans, including what altitude to fly, gauging fuel burn, and reading the weather. The two will share pilot duties. Zwego worked on flight planning for Flying Saluki competitions while a student, and is now an assistant coach.

“The biggest downfall appears to be fatigue and a need for proper sleep and eating to be able to complete the race,” she said. “Heather and I are definitely going to have to come in with strategic planning to see how much we are able to handle and how much flying we can do. That will come with splitting duties and learning to work as a crew.”

Another benefit to the event is professional development, Zwego said. While Zwego has flown in the Midwest and worked as a flight instructor in the Chicago area, the air race will offer new challenges and experiences she can then share with her students .

Determining how to approach mountains or the Air Defense Identification Zones in the Washington, D.C., area provides new challenges, she said, adding that climate differences from the Gulf to the Northeast will also be striking.

“Between the weather and the planning that has to go into this it will be an amazing experience,” she said. “I’m going to be able to then share that with my students.”

For more on sponsorships or fund-raising information, contact NewMyer at 618/453/8898 or by email at newmyer@siu.edu. 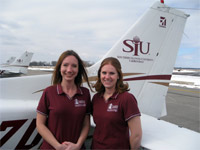 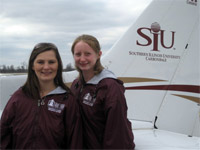