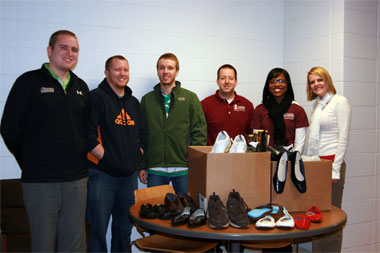 CARBONDALE, Ill. -- If you’re looking for a way to do some good, let someone else walk some miles in your shoes.

“It doesn’t even have to be a pair -- we can take a single shoe,” said Griggsville native Daman Emrick, a master’s student in kinesiology who serves as the new student organization’s president.

Soles4Souls will accept athletic and dress shoes, sandals, work boots, cleated gear, even dance shoes and flip flops, as long as they’re clean and in reasonably good shape. (For more information about the charity, log on to www.soles4souls.org.)

The sport studies group has donation boxes at the kinesiology office in Room 107 of Davies Hall, at the equipment desk of the Student Recreation Center, 300 E. Grand Ave., and in Room 171 of Lingle Hall. Claire Mooney-Melvin in Room 151 of Lingle Hall also will take shoes. You may donate footwear up through Feb. 25.

“If you’ve always wanted to help someone but haven’t had the time, this is your opportunity,” Emrick said.