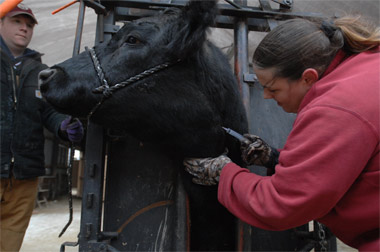 CARBONDALE, Ill. -- An old herbal remedy used to doctor everything from smallpox to stomachaches in humans may one day help cows have more calves.

Jamie M. Douglas, a graduate student in animal science at Southern Illinois University Carbondale, has found that bovine oocytes (a cow’s immature “eggs”) will develop normally, even when exposed to a fungal toxin that interferes with that process, if treated with an extract of a plant called blessed thistle -- at least in the lab.

“Now we’re trying to see if it has the same effect in an actual cow,” said Douglas, who began research on the toxin while still an SIUC undergraduate.

The fungus that causes the trouble lives in the stems and blades of tall fescue, a common pasture grass. The toxic byproducts it produces do good things for fescue, helping the grass tolerate heat, drought and bugs. They’re not so friendly to grazing animals.

“As the toxins build up, the animals’ blood vessels constrict, they run a fever, and their circulation slows -- in some cases, so much that they slough off their hooves, their ears and their tails (because blood doesn’t reach their extremities),” Douglas said.

“In terms of reproduction, their hormones get out of whack, so they cycle more irregularly, and you see lower conception rates, smaller birth weights and lactation problems.”

A drug can combat the toxin’s effects in horses, but that solution won’t work for cattle.

“The Food and Drug Administration has strict regulations about feeding medications to animals used for meat, and that drug isn’t approved for cows,” Douglas said.

While fescue grasses that do not contain the fungus exist, these grasses have more trouble with bugs and disease than the pasture variety. In addition, cattle find them less tasty and so eat less. They’re also more expensive.

“Farmers need a crop they can afford and one that will maintain itself, and that’s tall fescue,” Douglas said.

Working with SIUC animal scientist Karen L. Jones, who has spent a decade searching for a way to deal with fescue toxicosis, Douglas started small. Because the toxins keep oocytes from developing into eggs, she first focused on recreating that disruption in a Petri dish. Success there led to a search for a way to reverse the effect, and that search led her to blessed thistle.

“Blessed thistle extract has been used in humans to reduce fever, increase circulation, regulate hormones and stimulate milk production -- the same problems we’re having with the cows -- so we wondered if it would have the same effect on them,” Douglas said.

“And because it’s a plant instead of a medication, the FDA regulations don’t apply.”

In the lab, Douglas set up four sets of oocyte-laden dishes. She left one set alone while dosing another with blessed thistle. The other two sets got the toxin, but only one of them received a thistle treatment. Egg development proceeded normally in the first two sets. It fell significantly in the toxin-laced dishes without the thistle extract, but in those treated with both toxins and blessed thistle, egg development matched the level attained by the oocytes in the dishes she’d left alone.

“Once the rumen (part of the cow’s digestive system) gets involved, this may not work at all,” Douglas said.

“We need to assess the efficacy of blessed thistle after it’s been degraded in the rumen.”

Douglas and Jones presented the initial work with blessed thistle extract at a symposium on fescue toxicosis in October 2008. Researchers there showed some interest, Douglas said, but because so many scientists have searched so long for a cure, the idea that an old-fashioned herb could handle the job met with some giggles.

“That’s OK,” Douglas said. “When it works, they won’t be laughing then.”