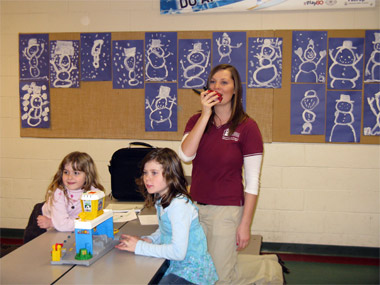 Looking to the horizon -- Ashley Carder, right, a visiting assistant instructor in Southern Illinois University Carbondale’s Department Aviation Management and Flight, directs a student on her flight pattern during a “Let’s Wing It” program activity at Gen. John A. Logan Attendance Center in Murphysboro. Waiting their turn to practice talking to the control tower are Allison Jaynes, left, who is in kindergarten, and Madeline Hayes, who is fourth grade. (Photo by Pete Rosenbery) Download Photo Here

“If you want to go somewhere, you have to ask for permission,” reminded Carder, a visiting assistant instructor in Southern Illinois University Carbondale’s Department of Aviation Management and Flight. The planes, of course, were toys. But for the kindergarten through fifth-grade students, all participants in the Murphysboro school district’s latchkey program, the experience helped them learn about the aviation profession and how pilots communicate on the radio.

The activity is one of several in the “Let's Wing It” program, which is designed to get more children involved in aviation. Initially funded in 2005 through the Illinois Center for Specialized Professional Support and intended to serve underrepresented populations, aviation faculty and students take the program to local elementary and middle schools in the region.

Lorelei Ruiz, an associate professor in the Department of Aviation Management and Flight and assistant chief flight instructor, said it’s important to get children interested in aviation at an early age. Many students in the University’s nationally recognized aviation program became interested in aviation either through a family member, or that first trip to an airport or on a plane, she said.

“A lot of children just aren’t exposed to the breadth of opportunities that are available to them,” Ruiz said. “This is one way that we can get to them early and say, ‘Look, this is something you can do.’”

Along the way, children also realize through the program’s activities that what they are learning in mathematics, geography and reading, even in first or second grade, can help them become a pilot some day, she said.

Other activities this particular afternoon included allowing children time on a flight simulator -- a laptop computer with a control yoke mounted to the table -- to practice flying.

Fifth-grader Mishont Gibbs said he got to fly the simulator to Chicago. The son of April Gibbs, he has thought about becoming a pilot. He sat next to the plane’s wing when his family flew from St. Louis to Florida on a vacation, and he liked to watch as the airplane made its turns.

Nine-year-old Everett Gariepy, who is in the third grade, flew to Seattle with the simulator. While he admitted he crashed his plane, Everett said he liked taking off.

“It was pretty cool,’ he said.

Everett’s dad, Steve, watched his son control the yoke under the direction of Jeff Hayes, a senior lecturer in Aviation Management and Flight. Noting that kids play video games and are adept at computer games, Steve said it’s nice to have a real-world application.

“There’s going to be a pilot somewhere in the groups they visit,” he said. “This might be the thing that gets their minds wrapped around that they can be a pilot. It’s a really valuable thing to put in front of them so that they can see the opportunities. We tell kids ‘you can be anything you want,’ but that doesn’t get them headed in the direction. Putting something in front of them and letting them see it makes the difference a lot of times.”

Madeline Hayes, who is in fourth grade, said she likes to fly with her father, Jeff. While she wants to be a teacher when she grows up, Madeline said she likes how pilots talk into radios and could also see herself becoming a pilot one day.

About 15 percent of SIUC students who begin in the aviation flight program are women, which is a little higher than the national average, Ruiz said. She emphasized the importance of the volunteer efforts of faculty and students in the outreach program’s success.

“It’s events like these that renew our faculty members, and also our students’ love for aviation because they can see that in the eyes of the children they work with,” said David A. Newmyer, chair of the Department of Aviation Management and Flight. “It’s fun for them to do and to offer this to the community.”

This year marks the 50th anniversary of SIUC aviation.

Introducing children to aviation at an early age is vital because of the numerous aviation-related opportunities available, Jeff Hayes said. Jobs outside of being a pilot include air traffic control, maintenance, weather dispatch, scheduling, airport management and planning, and working for the Federal Aviation Administration.

“Each time a plane goes up there is a lot of teamwork that goes behind it,” Hayes said.

Carder earned her bachelor’s degree in aviation management and flight from SIUC in 2005. She enjoys the monikers that children come up with for their planes. Carder said it’s important that they begin to think of “what kind of passions they might have and what they might want to be when they grow up.”

For Carder, her passion for aviation started in junior high on a flight with her family as they were returning from Seattle, and the plane was flying over a thunderstorm. The lightning reminded her of fireworks.

“I thought how cool would it be to have a job where you can have this scenery all the time,” she said.

Carder took an aviation ground course offered at her high school in LaGrange, and the course instructor took students flying.

“That’s when I really fell in love and decided to come down here,” she said.