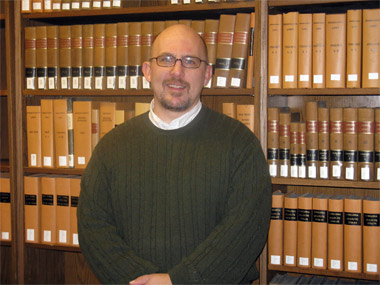 When you were a youngster, what did you want to be when you grew up?  At various times, an Air Force pilot, a surgeon, an NFL player, and a lawyer.

If you could choose another profession, what would it be and why?  I would like to be a Foreign Service officer in the State Department, posted to the Middle East.  I've always enjoyed travel and learning about other cultures.  I've had the opportunity to live in Egypt and Israel, and I'd like to go back with my family.

People don't know that you ... Started college with braces and an orange-bleached perm.  It was hard to get a date.

Who inspired you and how?  Edward “Fast Eddie” Kimball taught my evidence and criminal law classes in law school.  He was an old-fashioned, courtly gentleman who wore a bow tie to class every day, respected his students even as he held us to high standards, and displayed a thorough grasp of and enthusiasm for criminal law and evidence.  His teaching ignited a passion in me for both of these subjects, and to be able to teach these same classes myself gives me the opportunity to pass what he gave me to further generations of students.

What was the first "album" you ever bought, and was it an LP, 8-track or CD?  It was Chicago 16, and I bought it on 8-track.  My grandmother and I took a road trip that summer in her Oldsmobile Delta 88, which had an 8-track player, and from Sioux Falls, S.D., to Reno, Nev., that was about the only music we had to listen to.

If you could pick an actor/actress to play you in a movie, who would you pick, and why?  Michael Chiklis, who plays “The Thing” in Fantastic Four.  When he isn't a mutant made of granite, we bear more than a passing resemblance to each other.

What is one random fact about you? I have won the Buffalo Wild Wings Blazin’ Challenge three times.

What is your pet peeve?  Meetings.  It takes a really good meeting to make up for no meeting at all.

What would you like your gravestone to say about you?  “He planned to be spontaneous, and succeeded.”