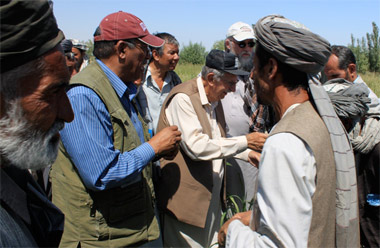 Although he began his 31-year career at SIUC specializing in corn genetics, “The Big O” switched gears in the mid-70s when a troubling new pest began plaguing the region’s soybean farmers.

“There was a huge concern about finding ways to control it, and breeding for resistance was a logical approach. He built our early breeding program in response, developing ‘Egyptian’ and ‘Pyramid, ‘(and later ‘Pharaoh’ and ‘Nile’), without which SCN losses could easily have reached 70 to 80 percent.”

When soybean sudden death syndrome hit the area, Myers was one of the first to work on developing varieties that had resistance to that disease.

“His work breeding SCN- and SDS-resistant varieties and the good will and reputation that the College (of Agricultural Sciences) derived from that work are the cornerstones of his legacy,” said Gilbert. H. Kroening, whose ties with Myers go back some 40 years.

Kroening, dean of the college from 1974 to 1976 and former director of its international agriculture program, praised Myers as “a true internationalist,” noting that he had worked with farmers in such diverse overseas settings as Afghanistan, Brazil, Pakistan, Thailand and Zambia, both before his 1999 retirement and afterward.

“Oval thought the work he did with development agencies was important because the agriculture programs and their students were the best hope for the future of those countries,” Kroening said.

“He was the eternal optimist. He could always see potential, even under the worst conditions you could imagine. As long as there were people he could work with, he knew positive things would happen.

“After he went to Afghanistan for the first time (in 2003), I asked him what he thought (about the country’s prospects), and he said, ‘Well, they don’t have any money, any facilities or any equipment, but there’s hope.’ And that to me epitomizes him.”

The only child of an Indiana farm family, Myers stayed true to his roots, growing corn and soybeans on a small holding in De Soto through much of his academic career.

“That really kept him in touch with the heartbeat of Southern Illinois agriculture,” said Donald J. Stucky, former department head and longtime friend. “As a result, the farmers in the region were very receptive to his ideas.”

The farm also served as a kind of classroom extension, said emeritus faculty member Farrel Olsen, who early on team-taught a course on corn and soybeans with Myers.

“He had experimental trials out there, and he would share his findings with his students,” Olsen said. “You don’t find a lot of people in agriculture colleges who can take something from their own experience and give it to the students.”

Those who knew him recall his sweet tooth (he loved Dairy Queen ice cream, and a road trip with him usually included a DQ stop), his love for Saluki athletics (Myers could consistently predict when his teams would win) and his poker skills (he felt the same optimism about the cards as he did about people). The words “intelligent,” “open,” “engaging” and “gregarious” often cropped up when people talked about him, and most remembered Myers as a diligent worker.

“Even after he retired, he kept on working, and when he started something, he would stay with it until it was finished,” Olsen said.

“He played hard, he worked hard, and he got a lot done.”