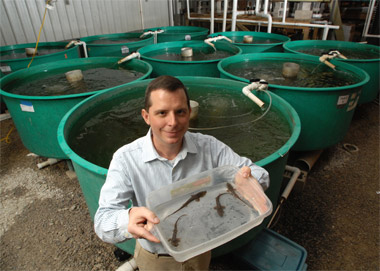 Brian C. Small, whose research interests include fish growth, metabolism and reproduction and the improvement of aquaculture production techniques, will hold dual appointments in SIUC’s Fisheries and Illinois Aquaculture Center and in the College of Agricultural Sciences’ Department of Animal Science, Food and Nutrition.

“The world is turning more and more toward aquaculture to fill growing needs for fish products. Dr. Small’s research is at the forefront of fish physiology and production, placing SIUC further in a leadership role in helping the world meet its aquaculture needs. Further, his work has wide applicability to other systems including agriculture and human health. Through research collaborations and teaching, he will form a bridge between the College of Agricultural Sciences and our research center.”

Said Todd A, Winters, who is serving as chief operating officer for the agriculture college during its search for an interim dean, “The addition of Brian Small opens a new ‘agricultural’ area that is going to become very important as we try to meet the world’s food needs.

“Expansion of aquaculture will also increase the demand for soybean feed products, giving Illinois farmers more market opportunities. In addition, he will expose animal science students to a potential career path they may not have previously considered.”

Small comes to the University from the U.S. Department of Agriculture’s mid-south Agricultural Research Service, headquartered in Stoneville, Miss. During his decade there, Small worked in a research unit focused on catfish genetics.

“I spent a lot of time identifying the physiological mechanisms that regulate growth and reproduction and identifying specific genes that allow certain fish to grow faster on less feed while producing more offspring,” Small said.

“I have done a lot of work on increasing the percentage of eggs that hatch, and as a result of that research we have been able to increase hatch rates at least 20 percent on average,” he said.

At SIUC, Small plans to continue his work with catfish, looking at physiological pathways that regulate food intake and may influence the fishes’ use of carbohydrates. He is particularly interested in the role of ghrelin, a hormone, discovered by Japanese researchers in 1999, that stimulates hunger in a variety of mammals, including humans. Small has identified two genes for ghrelin in catfish as well as their receptors and proteins. One of those receptors seems highly active in the pancreas, the seat of insulin production.

“In mice, ghrelin is involved in insulin regulation, so I will be looking to see if that’s true in fish,” Small said.

“If so, we might be able to use that to improve carbohydrate utilization in their diet. This is a newer area in aquaculture. Not much has been done with ghrelin and insulin in fish.”

Small also will embark on an entirely new research venture aimed at relieving the pressure on dwindling sturgeon populations. Growing demand for sturgeon caviar -- the salted eggs of various species -- has reduced the numbers of these large fish worldwide, both because an egg eaten is an egg that won’t become a fish and because fishermen kill the females to get at the eggs. In addition, those fish left in the wild just aren’t reproducing as they once did.

Small will work on developing techniques to raise sturgeon in captivity, both to boost species numbers and to meet the demand for caviar. His fish of choice for this project is the shovelnose sturgeon, a small, freshwater fish with both valuable roe and tasty flesh, commonly found in both Missouri and Mississippi river systems. While this fish is not yet listed as an endangered species, the U.S. Fish and Wildlife Service proposed in September protecting it in habitats that overlap those of the threatened pallid sturgeon; that area that includes the Mississippi River.

Improved reproduction will play a key role in producing both more fish and more eggs. To try to cut the time shovelnose sturgeon need to become sexually mature, Small will tinker with their diet.

“Maturation is often related to size, so we want a diet that will get them there quickly,” Small said.

“Once we determine the diet required for growth, we will then determine the optimum diet for roe production, especially in terms of quality measures such as texture, consistency and taste.”

The first studies have already begun with small sturgeon caught in the Mississippi. Researchers will trawl for larger fish this spring to use in broodstock work, though Small aims ultimately to produce in captivity all fish used in his research.

Small, who has twice won awards recognizing early career research achievements, has with colleagues published more than 60 articles in professional journals and has received some $700,000 in grant support over the last decade. His professional ties include membership in the American Fisheries Society, Sigma Xi, the Society for Integrative and Comparative Biology, and the World Aquaculture Society.

A native of Greeneville, Pa., Small earned his undergraduate degree from Kutztown University of Pennsylvania in 1992. He earned his doctorate in 1998 from the University of Maryland, where he also did a two-year post-doctorate.