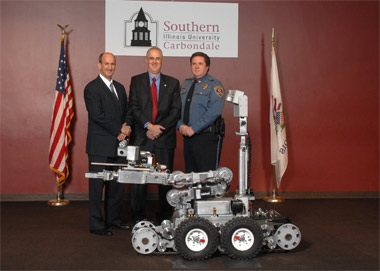 CARBONDALE, Ill. -- Stuart R. McArthur, special agent in charge of the FBI’s Springfield Division, announced on Friday, Dec. 18, the re-accreditation of the combined Southern Illinois University Carbondale and the Carbondale Police Department Bomb Squad. The squad is one of 470 nationally accredited public safety bomb squads in the United States and one of 12 in Illinois.

The accreditation is through the FBI’s Hazardous Device Operations Center (HDOC) in Quantico, Va. This unit provides the training and oversight for all of the accredited bomb squads in the United States. HDOC funds the training and certifies all bomb technical intelligence sharing and provides equipment and resources to local jurisdictions to enhance their capability to respond to bombing incidents and terrorist threats involving improvised explosive devices (IEDs).

All of the SIUC and the Carbondale Police Department Bomb Squad bomb technicians are nationally certified to standards set by the National Bomb Squad Commanders Advisory Board (NBSCAB) and are thereafter certified by the FBI. All bomb technicians are required to re-certify every three years at the FBI’s Hazardous Devices School located on Redstone Arsenal at Huntsville, Ala. The bomb squad accreditation is valid for a period of five years and verifies that bomb squad safety equipment, such as state-of-the-art robots and x-ray systems, are in their equipment inventory and that there are certified technicians available for bomb response.

The Springfield Division of the FBI has formed a partnership with several law enforcement agencies within central and Southern Illinois to enhance the multi-jurisdictional response capability of Illinois bomb squads.