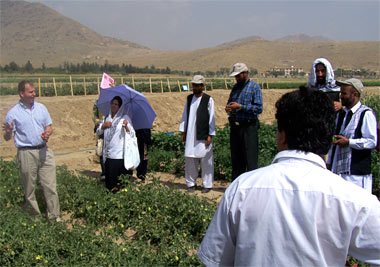 CARBONDALE, Ill. -- Ignore the desert hills looming behind the vegetable plots, and it could be just another field day of the sort Southern Illinois University Carbondale’s College of Agricultural Sciences regularly hosts for regional farmers. Experts give talks, growers ask questions, and the usual big meal caps off the event.

But those dry hills, the headscarves worn by the women and the need for a translator all signal that you aren’t in Illinois any more. This is Afghanistan. The field day --held in August with funds from the U.S. Agency for International Development through a project called Afghanistan Water, Agriculture and Technology Transfer (AWATT for short) -- aims to transfuse American know-how into a farm culture still relying heavily on animal- and manpower to raise crops in a land where rain seldom falls.

“There are a lot of problems out there, but we focused on the ones we could help them solve quickly through water management,” says S. Alan Walters, SIUC’s point man for veggies and an AWATT veteran.

“Since water is so scarce and so valuable, our partners from Colorado State University emphasized developing systems to use it more efficiently, mainly through drip irrigation. My purpose was to show how better water management results in better disease management. Water management plays a huge role in the frequency of certain vegetable diseases.”

While Afghans grow a wide range of vegetables, including okra (their hands-down favorite), Walters homed in on tomatoes and chili peppers. Both crops sell well, in country and abroad, and both suffer severe yield loss caused by Afghan farming practices, especially when it comes to water.

Phytophthora blight, a fungal disease that strikes not just peppers and tomatoes but cukes and eggplants, too, proves particularly thorny for Afghan growers because of their irrigation methods. They either flood the entire field so crops stand in water for days on end, or they flood the spaces between their furrows.

“Under flood irrigation, some of the fields have a 70 percent loss from Phytophthora blight; with furrow irrigation, it’s 20 percent.” Walters says.

“Because the plant is not sitting in water with furrow irrigation, you don’t have the loss you see with flooding, but with drip irrigation, that loss would be less than 5 percent.”

Blossom end rot also affects both crops, but here the management problem lies in timing. The plants don’t get the water they need to move the soil’s scanty calcium into the developing fruit. Better water management would improve things some, but -- particularly for tomatoes -- what farmers really need is the punch that a combination of proper watering and calcium fertilizer could deliver.

American farmers apply calcium-based fertilizers to their fields at the start of the growing season, following up with a calcium-based leaf spray to knock out the rot before it gets started. But fertilizer costs money, a commodity in short supply on Afghanistan’s hardscrabble farms.

“If we can help them understand that they can improve their crop just by going out and applying a little bit of calcium to their soil and using better water practices, they will easily make up the cost of that little bit of extra input they have with the extra yield,” Walters says.

Walters took part in two field days on his last trip, both on the outskirts of Kabul. He will be heading back to Afghanistan next summer for several planned field days in three Afghan provinces.

“We need to evaluate several older open-pollinated sweet corn varieties -- this is a new crop for them,” Walters said. He will compare the strengths and weaknesses of the different varieties as well as the effects of different irrigation methods.

“This kind of education is our overriding purpose there, but it takes time,” he says.

“You have to do the research and the on-farm demonstrations to get them to think about and understand how everything works together in a system -- like how better water management relates to less problems with disease. You can’t do that if you go over just once.”