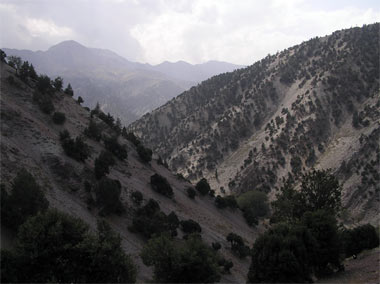 CARBONDALE, Ill. -- In arid Afghanistan, forests might seem to have little connection with farms. Not so, say two forestry professors from Southern Illinois University Carbondale.

“The biggest problem farmers there have is the lack of a steady supply of water when they need it,” says John W. Groninger, an expert in the cultivation of forest trees.

“Forests collect water in the winter and dispense it fairly evenly through the growing season. Without the forest, the water comes down in destructive spring floods and is gone.”

Groninger and colleague Charles M. Ruffner are working in Afghanistan under the auspices of a U.S. Agency for International Development project called AWATT -- Afghanistan Water, Agriculture and Technology Transfer. In addition to the interdisciplinary team from SIUC’s College of Agricultural Sciences, AWATT involves agriculture experts from Colorado State University, New Mexico State University and the University of Illinois at Urbana-Champaign as well as in-country universities, government ministries and other Afghan agencies. All of them focus on increasing the country’s ability to sustain itself through a better use of land and water.

The pair’s most recent trips, in late summer and early fall, build on earlier visits made in 2005 and 2008.

“The last time we went, we talked with water users and farm owners to find out what the issues were relating to water availability,” Ruffner says.

“Now we’re putting what we learned into practice upstream.”

Monsoons bring rain to Afghanistan’s mountainous southeast, making cone-bearing forests there deep and dense. But these forests face threats. Mountain residents cut down trees -- lots of trees -- to sell, to smuggle, to build with, to burn. They dig up roots for fuel. They graze their sheep on low-growing seedlings, plants and shrubs, destroying the next generation of trees and allowing soil to wash off the slopes and into the dams and irrigation canals downstream.

“They’re hard on the land because they need every possible resource just to survive into the next month or week or day,” Groninger says.

“All those years of war have meant that the priorities are on surviving. That can separate you from what you need to do to sustain your society long term.”

This year’s efforts reflect a shift in focus for Groninger and Ruffner, from the relatively safe north to the riskier southern and eastern portions of Afghanistan.

“This is where they have true forests, and the Ministry of Agriculture wanted us to go there, but the security problems add to the challenge,” Groninger says.

“Before, we could travel as civilians, but in the southern part of the country, everything is strictly under the wing of the U.S. military.”

The military’s focus has also shifted, from projects that become targets as soon as they’re built to restoration efforts that sustain farming and natural resources.

“It’s frustrating for them when they no sooner finish something like a building and then it’s blown up,” Groninger says. “As one commander told us, ‘It’s tough to blow up trees.’”

These shifts in emphasis allowed the foresters to work closely with soldiers in trying to restore Afghanistan’s upland forests and watersheds.

“They didn’t know how to establish vegetation in an inaccessible, overgrazed environment or how to develop a vegetative buffer system along the waterways,” Groninger says.

“We put together plans for getting grass and trees in the ground, the first tangible step for getting the watershed under control.”

Ruffner took core samples from trees to use in determining how much rain has fallen annually in the region over the last two to three centuries.

“We have no idea how much water courses through these watersheds because they have no gauges,” he said.

“If we know whether recent years have been abnormally dry or abnormally wet, the engineers can better design systems that are appropriate for the area.”

At the request of provincial officials, they also taught workshops on forest protection.

“In some areas, everyone lives from the forest -- it’s a huge economic driver -- but people lack an understanding of how a healthy forest relates to their overall livelihood,” Groninger says.

Ideas that seem obvious to Americans -- keep sheep from eating too much of the low-lying vegetation, keep rills from becoming gullies, leave cones so that seedlings will grow -- in many cases represent new knowledge for Afghans.

“If you grow up not seeing tree seedlings, for example, because they’re all eaten, you will not understand where the next forest comes from,” Groninger says.

In addition, much folk knowledge has been lost, Ruffner notes.

“Men our age don’t exist -- they were killed off,” he says. “There’s a new generation who haven’t had the old traditions passed down.”

Since their return, the pair has put together what they refer to as a “call to arms” for American foresters and watershed experts, urging them to put their knowledge to work in this ravaged country.

“A lot of the problems Afghans are going through now are those that people in this country went through 100 years ago,” Groninger says.

In the States, those problems led to the establishment of cooperative extension systems, a federal forestry service, water and soil conservation agencies. Afghanistan offers those with specialized skills the opportunity to bring such advances to a country that desperately needs them.

“We want to inspire people, especially the young, to go out into the world and do good,” Ruffner says.

Adds Groninger, “We want people to understand that everybody has something to offer, that they can do things they’ve never dreamed of.”

Ruffner smiles. “I tell my classes, ‘Don’t sell yourself short,” he says. “You never know what you can do for someone.’” 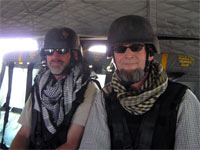 Another day at the office -- To get to
work in Afghanistan's southeast region,
Southern Illinois University Carbondale
foresters (from left) John W. Groninger
and Charles M. Ruffner had to don
helmets and flak jackets and travel by
helicopter. (Photo provided) Download
Photo Here 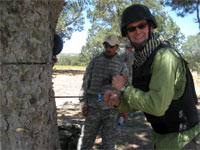 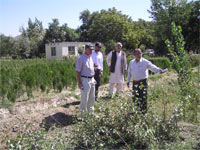