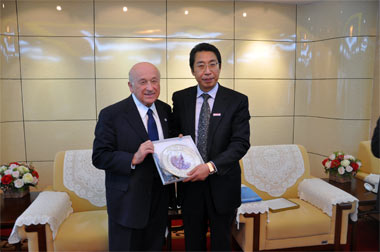 Productive trip -- SIUC Chancellor Samuel Goldman is pictured with Shen Changyu, president of Zhengzhou University in Zhengzhou, China. The university was one of three in China and six in Taiwan visited by Goldman and other SIUC officials earlier this month. (Photo provided) Download Photo Here

CARBONDALE, Ill. -- Southern Illinois University Carbondale officials are confident that just completed trips to China, Taiwan and India will result in short- and long-term gains for the University.

During a news conference today (Nov. 24), officials discussed the many benefits of the trips, which included visits with faculty, administrators and students at three universities in China and six in Taiwan.

In fact, John A. Koropchak, vice chancellor for research and graduate dean, noted that China’s higher education ministry includes SIUC in a list it published of 100 world-renowned universities.

At the University of International Business and Economics (UIBE) in Beijing, Goldman delivered two speeches, one of them a keynote address, to The Second Forum for International Education Leaders 2009. More than 200 university presidents and chancellors from around the world participated in the conference.

“SIUC is a national and international university,” Goldman said. “We must reach out to students and faculty everywhere -- we must engage with other universities -- if we are going to compete effectively in our global society.”

Goldman said there is particular interest in China and Taiwan in a number of SIUC’s signature programs, including health care, hospitality, master of business administration, communication, aviation, engineering and science.

“This was an unbelievably productive trip,” he said. “We have strong partnerships with those universities and we made some very good friends.”

Officials expect discussions with one of the universities to lead to the establishment of a third SIUC center to aid in student recruitment. There are SIUC centers at UIBE in Beijing and at Zhengzhou University in Zhengzhou, China.

“These centers will become hubs for student recruitment,” Goldman said. “Their personnel will pre-screen their students, but we will make the final decision on admissions.”

Wilson said there were discussions with officials at I-Shou University in Taiwan about the establishment of an SIUC center there. I-Shou, he added, is a private institution with an enrollment of about 17,000 students.

“What’s very interesting to them is that they are looking at this as a hub center, because they also have a high school associated with their university,” Wilson said. “The high school offers students in ninth through 12th grade a track for studying abroad.”

Wilson said SIUC officials will work closely with officials in the centers “to let them know our admission requirements program by program. Then they can talk with the students about those requirements. This will help us. They advise students all the time, they know those who are interested in studying abroad, and they know the students who will meet our qualifications.”

SIUC and Zhengzhou officials also discussed the establishment of a Confucius Institute on the Carbondale campus. The Chinese university would provide $80,000 to $100,000 annually and two faculty members to teach classes in Chinese language and culture and to promote research in China.

“Zhengzhou University is very interested and wants to be a partner in this,” Wilson said. “We are trying to put together a working group in the College of Liberal Arts, which is primarily where this would be housed, and locate office space. This would involve several departments in the college and perhaps some outside the college. We will put our team in contact with the people at Zhengzhou to put together the application. We hope to have that done by the end of February.”

Wilson and Lyons meet with standing-room-only crowds at the Chinese universities they visited. In Taiwan, they met with individual students and with small groups.

“Part of the reason there is so much interest is that China has a huge number of students interested in higher education, but there is a limited capacity,” Wilson explained. “They also have an annual national exam that everyone has to take. If you don’t score in the upper 2 percent, you don’t get to go where you want to go. So there are students who are extremely bright who can’t go where they want to because there are so many people. Zhengzhou, which is the largest province in China with a population of well over 100 million people, has close to 20 million people in the age group ready for undergraduate or graduate education. The city where the university is located has a population of 10 million. So you get really good students.”

Koropchak participated in the China leg of the trip. He said the SIUC centers “would be a conduit for exchanges of faculty and students, both graduate and undergraduate. On that basis alone, this was one of the most productive international trips I have ever been on.”

He noted SIUC already has student applications for the spring semester, including in the College of Mass Communication and Media Arts and for the master of public administration program. SIUC enrolled 18 students from UIBE in Beijing this fall.

“These agreements have long-term benefits, but visits such as this one can have short-term benefits that may influence our spring enrollments,” he said. “Ideally we will see a larger influx of students through these programs next fall.”

Yen, described by Goldman as SIUC’s liaison to China and Taiwan, also is optimistic about the international partnerships.

“We foresee that there will be a steady influx of students, both undergraduate and graduate, coming from China and Taiwan for many years to come,” Yen noted.

Officials predict a similar outcome from the trip to India. Viswanathan said the trip resulted in drafts of memorandums of understanding with two universities in Hyderabad, which “will enhance recruitment of students from these two universities in addition to establishing faculty and student exchange programs.”

Goldman said that students attending universities in China, Taiwan and India that have memorandums of understanding with SIUC will be eligible for an alternative tuition rate equivalent to SIUC’s in-state rate.

He expects 150-200 students from China, Taiwan and India will enroll at SIUC next fall.