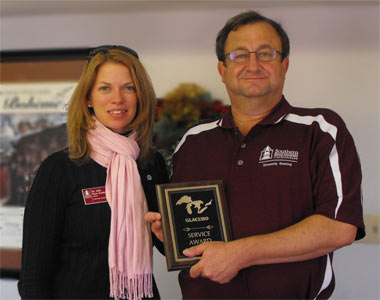 The pronouncement from the Great Lakes Association of College and University Housing Officers (GLACUHO) came at the organization’s annual conference this month in Ft. Wayne, Ind.

“I felt honored. I appreciate my co-workers and the people in University Housing who took the time to write the letters in support of me. I was touched by that,” Stine said.

A Naperville native, Stine earned his bachelor of science in mechanical engineering in 1980 at the University of Iowa. He worked as a plant engineer at Monsanto Chemical in St. Louis for a couple of years followed by a stint from 1982 to 1988 as senior facilities management engineer at McDonnell Douglas in Tulsa, Okla.

A plaque recognizes Stine’s accomplishment, given in recognition of his dedication to his profession and the students served by University Housing. Obviously a bit uncomfortable in the limelight, Stine has won the respect and admiration of those he works with at SIUC.

“Glenn is simply outstanding in his role with Universities Housing facilities. He is not only fully dedicated to the students at SIUC but he is committed to his staff and sets an amazingly positive example for all University Housing facilities staff to follow,” said Julie Payne Kirchmeier, director of University Housing and Saluki First Year-Facilities, in her letter nominating Stine for the award.

The award criteria state that the winner must demonstrate significant contributions to his or her institution, must show excellence in overall job performance, go above and beyond job description in displaying initiative or creativity, work to educate others on facility issues and mentor other professionals in facilities. Also, the winner must demonstrate an understanding of student needs and develop projects, programs and initiatives to meet those needs, and must foster inclusiveness with appreciation of differences as well as build strong relationships with the campus community.

Payne Kirchmeier said Stine not only meets but also exceeds those criteria. She said he was the lead liaison for the construction of the first new housing in 40 years at the University, the $26 million Wall and Grand Apartments. He’s been working with Recreational Sports and Services creating and implementing a campus master plan for student use of recreational space and he serves on the University’s All-Hazards Planning and Response Committee. She notes that in the wake of the devastating May 8 storm, Stine saw to it that staff boarded up 90 broken windows in the towers area and assured most family housing apartment buildings were under roof cover before more rain hit.

“His efforts were nothing short of phenomenal,” Payne Kirchmeier said.

She praised Stine for working well under pressure, for his commitment to students and staff, and for his work on sustainability issues.

“I believe that Mr. Stine is by far the best facilities manager with whom I have had the pleasure to work in my tenure as a housing professional and I can think of no one more deserving of this award,” she added.