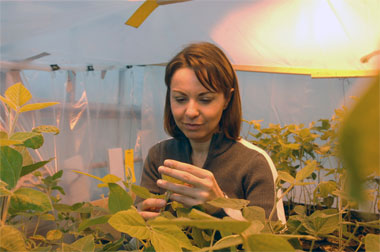 Good breeding -- In a campus greenhouse, soybean breeder Stella Kantartzi of Southern Illinois University Carbondale checks the progress of a new line she hopes will be resistant to pests. (Photo by Russell Bailey) Download Photo Here

CARBONDALE, Ill. -- Growing demand for soybeans that have not been altered genetically has led to a fork in the road for the bean-breeding program at Southern Illinois University Carbondale.

“If we can ensure that there’s pretty much the same yield and quality in non-GM soybeans, it will help with exports, and in the future, it may also help our farmers. Rising costs of GM seed and the herbicide it needs along with the low price the farmers get for their soybeans are cutting into their profits. Improvements in conventional varieties will give farmers a choice.”

“That’s where the profit is for the farmer,” Kantartzi says.

“We also care about composition -- the protein and the oil content -- because of its importance to diet. And we want new varieties to be resistant to diseases.”

Kantartzi, one of what she describes as “the new generation” of breeders, kept many elements of the traditional program she inherited from Schmidt, including some ongoing projects that will yield new varieties not that far in the future.

“In addition, I kept the multi-location field research system (the program has more than 22,000 individual plots in eight Southern Illinois locations), but I am using new field designs (the arrangement of plants in the field) so I can apply computer-based selection,” she says.

“I also organized a molecular lab; the breeding program didn’t have one of these before.”

Kantartzi aims to create a breeding system that combines the traditional approach -- selecting plants out in the field based on observable characteristics -- with lab-based techniquesand computer technology. Thisallows her to search the DNA of plants chosen in the field for sequence fragments, or “markers,” that point the way to genes associated with particular desirable traits. Knowing which of the plants with the right field “look” also has good genes reduces the trial and error associated with conventional breeding.

“We think this will lead to more new varieties in less time,” Kantartzi says.

“Traditionally, it’s taken seven to 10 years; we believe that with the right tools and methods we can get that down to four or five.”

In addition, molecular work alerts the breeder to the presence of genes that don’t readily identify themselves in the field.

“Some traits are difficult to measure because they are influenced by the environment,” Kantartzi says.

“Because each environment is different, it’s important to create varieties specific to the location -- that results in better, more predictable yields. Markers will help us add valuable new traits to Southern Illinois soybeans.”

Markers also assist Kantartzi in her quest to breed varieties with resistance to soybean Sudden Death Syndrome and Frogeye Leaf Spot, the former a longstanding disease problem, the latter an emerging threat.

“The presence or absence of a marker can indicate resistance or susceptibility to disease,” Kantartzi says. “If we identify the right ones, we won’t have to inoculate plants with a pathogen and screen their reaction.”

As a breeder, Kantartzi feels some urgency about getting new varieties to market.

“The world population is growing, so we must have higher yields and better quality crops to meet the needs in food and feed,” she says.

“Breeders need to make as much progress in production efficiency in the next 30 years we have made in the previous 12,000.”

SIUC currently is negotiating with a seed company to release one new variety that boasts yields of 60 bushels per acre and a good resistance package. Expect it in the next year or so, Kantartzi says. An additional 10 promising lines -- high-yielding, resistant varieties with high percentages of protein and oil -- are in the pipeline. She thinks they will be out within the next five years.

“This program has a promising future,” Kantartzi said.