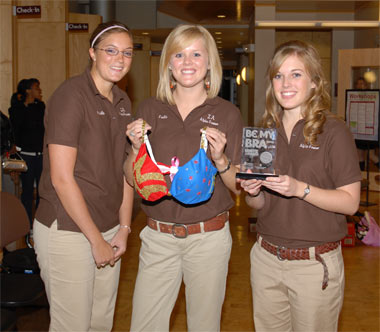 Award-winning bra -- The first-place entry in the third annual “Be My Bra” competition at Southern Illinois University Carbondale came from Sigma Alpha, the women’s agriculture registered student organization at SIUC. Shown with their “Fight Like a Girl” winning “wonder bra” are, from left: Michelle Carr of Macon, first vice president of the group; Leslie Frost of Flora; and Kathleen Carmack of Villa Grove, secretary. All three are senior plant and soil science majors. (Photo provided) Download Photo Here

CARBONDALE, Ill. -- From all over the Southern Illinois University Carbondale campus they came bearing bras. Not just any bras though. These were symbolic bras for the third annual “Be My Bra” contest, each one representing the fight against a disease that claims 40,000 lives in the U.S. each year.

The recent competition at the Student Health Center drew 23 entries, the most in its three-year history, and a sizeable crowd of spectators. Some of the festooned items of intimate apparel were stark reminders of the disease and its toll on victims and survivors; others were celebrations of special women and their lives.

“I think all that were present felt some degree of emotional connection with all who shared a story. For me, that was the most powerful aspect of the entire event -- students connecting with each other and caring for all those who shared their stories is what building a community of caring learners is all about,” said Christy Hamilton, coordinator for the sexual health, relationship violence and sexual assault programs at the Student Health Center, Wellness Center. “I was and continue to be amazed at how innovative, talented and caring our students are and I was especially honored that the professionals from SIH also got to see how awesome our students are.”

The Student Health Center and Student Development at SIUC joined with Southern Illinois Healthcare in sponsoring the competition for students, student groups and faculty/staff.

Sigma Alpha, the SIUC women’s agricultural registered student organization, was the three-peat grand champion with its “Fight Like a Girl” bra. It’s a motto for the organization and members felt it also was a fitting theme for their superhero “wonder bra.” During their presentation, the group noted that since the American Cancer Society gives the odds of a woman dying of breast cancer as 1 in 35, it’s likely it will strike one of the 42 women in the group. They cited as their inspiration the Bomshel country duo’s hit song “Fight Like a Girl” and quoted some of the strong lyrics in their presentation.

Second place went to Delta Zeta sorority. Members dedicated their bra to member Melissa Horan of Tinley Park in the Chicago area. Horan’s mother died of breast cancer when Melissa was just 16. The bra featured the Chicago skyline, a Saluki paw print holding breast cancer pins and gems representing the support of the sorority sisters as well as the Delta Zeta emblem.

Student Nutrition Academic Council took third place with its bra and presentation promoting the benefits of breastfeeding for mothers and babies. Some of the presentations that late-October evening were distinctly personal, such as the one from the American Institute for Architecture Students. In explaining their basic, stark, minimalist design, Alex Johnston told of how breast cancer has affected his family and how the bra’s components symbolize the strength and support of family and friends. Other entrants also honored specific women and their courage in battling breast cancer.

“When this started three years ago, it was to give students the opportunity to become involved, to think outside the box about breast cancer awareness and prevention. And they did. They really did. Each year it just gets bigger and better. They just keep surprising and amazing us. They really did a phenomenal job this year,” said Donna Crow, breast health patient navigator for SIH.

SIH will display the “Be My Bra” entries at various breast cancer events and screening centers around the region during the upcoming year.