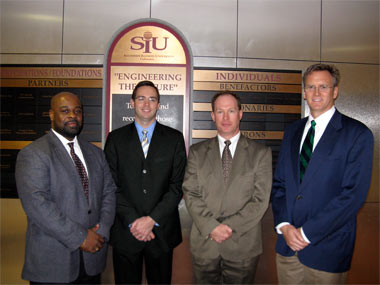 Government service -- Representatives of the U.S. government’s General Services Administration, both of them industrial technology graduates of Southern Illinois University Carbondale, met with members of that department this week to discuss hiring more SIUC graduates in the future. Left to right is Mandara Savage, chair and associate professor of the Department of Technology; David Robin Zickgraf, an industrial operations analyst supervisor with the GSA and a 2004 SIUC alumnus; Eric C. Horton, chief of industrial operations in the Midwest Operations Center, and 1987 SIUC alumnus; and Bruce DeRuntz, associate professor in the Department of Technology. (Photo by Tim Crosby) Download Photo Here

SIUC graduates having an impact in federal agency

CARBONDALE, Ill. -- The term “GSA” probably doesn’t resonate with the general public the way “FBI” or “CIA” does, but those flashy government agencies couldn’t operate without their nondescript cousin.

And, thanks to alumni of Southern Illinois University Carbondale, that behind-the-scenes agency is providing better service to taxpayers while employing more Salukis.

GSA stands for the U.S. General Services Administration; a huge federal agency that essentially makes sure the government has all the materials, real estate and services it needs to do its jobs.

The federal government could not operate without the GSA. It owns nearly every federal building in the country, leasing them out as courthouses, offices buildings and the like, making it the largest real estate owner in the nation. It manages a vehicle fleet numbering in the tens of thousands. In its role as a sort of big box store to the government, it ensures all government workers and members of the military have everything from fire engines to toilet paper and pens.

The agency has several divisions, one of which handles contract compliance with vendors, ensuring the quality of telecommunications, goods and services taxpayers purchase for government use. It’s in this division, known as the Federal Acquisition Service, that graduates of SIUC’s industrial technology program are having a big impact.

Eric Horton, a 1987 alumnus who serves as chief of industrial operations in the Midwest Operations Center, said he has hired at least seven SIUC industrial technology graduates since becoming a supervisor. Horton this week visited with faculty in the SIUC Department of Technology.

Horton and Zickgraf have worked as and supervised a particular position in the GSA known as the industrial operations analysts, or IOAs. People in these positions serve as the government’s field representatives to vendors under contract to supply goods and services.

IOAs, Horton said, require a special set of skills and traits. They need strong technical backgrounds as well as succinct communication skills, confidence and independence as they travel about the country ensuring the government is getting what the taxpayers are paying for.

“They indeed need to be able to talk the language of the vendor, with everyone from the CEO of a company right down the guy on the shop floor who is making the product,” Horton said. “It’s a specialized yet varied set of skills that they need.”

The GSA’s four branch offices around the country traditionally have hired people with a variety of backgrounds -- business and accounting, for example -- for the IOA position. But his agency has noticed Horton’s practice of getting strong results by hiring industrial technology graduates. Now, the GSA is talking about standardizing its hiring practices for IOAs, perhaps focusing requirements in that area.

“While people with these other backgrounds are good in their areas, in my opinion, they don’t have the varied, broad foundation we get from SIUC industrial technology graduates,” Horton said. “In our experience, the ability to read a technical document and understand what it says and be able to communicate that to a prospective contractor is invaluable.

“The individuals we’ve hired through the SIUC industrial technology program have the foundational skills that are well suited to the IOA role and responsibilities,” he said. “They have an understanding from a technical aspect of manufacturing operations and business operations. They understand what quality assurance and quality control is. They have a background in purchasing. The caliber of the individuals we’ve hired from here is being recognized on a national level.”

A native of Cahokia, Horton spent four years in the U.S. Navy prior to arriving at SIUC in the early 1980s. He started out in the mechanical engineering program, but it wasn’t quite right for him. After some looking around he came across the industrial technology program and found his home.

As graduation neared, he began looking for a job, interviewing with several companies. One day, he saw a notice saying the GSA would be on campus interviewing.

“I really had no idea what it was then,” he said. “My dad happened to work for the Department of Defense, and he told me the GSA was a good agency, so I went.”

As it turned out, another SIUC industrial technology graduate named Frank Hoeft hired Horton, as well as four other SIUC alumni. Zickgraf, a Metropolis native who graduated in 2004, started work soon after as IOA and is now a supervisor.

Both men said their careers in the GSA are very rewarding in terms of work conditions, salary and benefits. But the work is not for everyone. IOAs must be self-motivated, polished and possess solid technical and communication skills. The government expects a high level of professionalism and ethical behavior and IOAs carry a large amount of responsibility.

With GSA looking at how it recruits for these positions, SIUC industrial technology graduates stand to continue graining from the advanced training they receive during their undergraduate studies, DeRuntz said. SIUC graduates currently work in GSA positions in Cleveland, Cincinnati, St. Louis, Chicago, Tennessee and Atlanta.

“Our graduates are showing they can do this job and do it well,” he said.