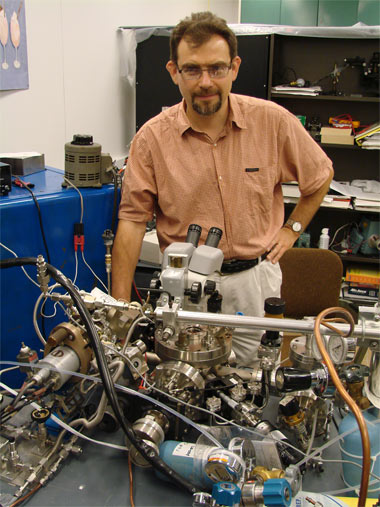 Building sensors -- Andrei Kolmakov, assistant professor in the Department of Physics in the College of Science at Southern Illinois University Carbondale, stands in his laboratory in the Neckers Building. Kolmakov has received a three-year $236,000 grant from the National Science Foundation to study nanowires -- tiny crystal wires only a few tenth-billionths of a meter wide -- as well as techniques for developing and characterizing them. His work could be key in the effort to build a new generation of sensors for applications in security and health care. (Photo by Tim Crosby) Download Photo Here

CARBONDALE, Ill. -- Animals rely on millions of smell receptors in their olfactory systems -- their noses and specialized centers of the brain -- to distinguish odors and identify substances. A researcher at Southern Illinois University Carbondale, however, is working on ways to improve on and test unbelievably small wires that can stand in for biological smell receptors and lead the way to extremely sensitive detection equipment.

Andrei Kolmakov, assistant professor in the Department of Physics in the College of Science, recently received a three-year $236,000 grant from the National Science Foundation to study nanowires -- tiny crystal wires only a few tenth-billionths of a meter wide -- as well as techniques for developing and characterizing them. His work, which collaborates with researchers in Russia and Germany, could be key in the effort to build a new generation of sensors for applications in security and health care.

Because of their tiny size and chemical reactivity, nanowires can detect extremely small concentrations of chemicals. Sensors based on nanowires also are extremely stable and power efficient, which is another major advantage over many current systems that are based on thin film nanoparticles, he said.

When put together in arrays of sensors and coordinated by software, they can form a sort of electronic nose that can send detailed information about their environment to humans. Applications might include very small, power-efficient sensors that can send doctors real-time information about a patient’s blood glucose level, for example, or lead to improved radio frequency identification tags -- often used in the retail sales industry, but with many other potential applications -- that can sniff the air for explosives or other chemicals.

Nanowires, used as detection filaments in such sensors, could make these possible. To do this, however, researchers need to know more about individual nanowires, their surface chemistry, electronic properties and their geometric structure.

“All of these applications require knowledge about nanowires themselves,” Kolmakov said. “We need to know things like how sensitive a particular nanowire is based on its surface chemistry, how reactive it is with the chemical and how readily it can turn that into an electrical signal for a sensor.”

Part of Kolmakov’s work on this grant focuses on this issue and improving on current techniques for characterizing nano-sized structures.

A major thrust of this effort involves improving on a tried-and-true method of studying the chemical composition of objects known as X-ray photoelectron spectroscopy. The method essentially involves illuminating the surface of an object with X-rays and then analyzing the electrons the subsequent ionization releases from the surface. Examining energy of these electrons provides the researcher with a profile or “fingerprint” spectrum that contains clues about the sample surface’s chemical makeup.

The technique works well on many samples, even those that are relatively small. But for the purposes of these types of extremely sensitive sensors, researchers must be able to study individual nanowires instead of a film containing many of the wires. In studying such films, researchers can only obtain averages for the entire sample, losing important details and characteristics that may make or break the nanowires’ usefulness in a sensor.

The problem is finding a way to use this powerful technique on such a small target as a single nanowire, which may only be a few nanometers in diameter. Kolmakov, therefore, is working on methods to do so, traveling to the few facilities in the world that can provide the necessary tightly focused X-rays. One such facility is an electron storage ring called ELETTRA in Italy, where Kolmakov conducted some preliminary work to test the concepts.

By inducing an electrical field in the nanowire, the electrons generated by the X-ray will flow through the nanowire. By scanning the tightly focused X-ray over the nanowire, Kolmakov also can learn important electronic characteristics -- such as resistance -- of a sample nanowire, as well as discover local defects and anomalies.

“We’re taking a long-used electron microscopy technique that is a very powerful way to study the surface of everything, and we’re implementing it to X-rays and to individual nanowires,”

Kolmakov said. “We also can look at the geometrical structures of the individual facets of the same, single nanowire using this type of technique.

“All of this helps us determine the best materials, size and other variables to optimize the nanowire’s function,” he said.

The other portion of research funded by the grant could lead to revolutionary research methods that would allow scientists to obtain controlled laboratory-quality results while working under real-world conditions.

Like they do with the X-ray photoelectron spectroscopy described above, researchers conduct most such experiments in a total or near vacuum. This allows them to better characterize the chemical reactions that, when they occur under normal atmospheric conditions, would be difficult to measure.

Researchers realize, however, that they must take such results with the proverbial grain of salt, as the vacuum conditions might alter things. Scientists refer to this challenge as “the pressure gap.”

Kolmakov, however, may have found a way to bridge that gap, using a method involving ultra-thin membranes originally developed for use in biological studies.

Kolmakov is developing so-called “environmental cells,” tiny chambers containing normal atmospheric conditions into which a researcher can place a sample. The researcher then places the environmental cell containing the sample inside the vacuum chamber of the spectrometry instrument and conducts the experiment as normal.

The membranes encompassing the environmental cell are so thin -- only a few nanometers or so -- that they do not interfere with the experiment. Yet they are strong enough to maintain normal atmospheric conditions inside the vacuum.

Biology researchers first developed the environmental cell as a means of studying living cells in the vacuum of a scanning electron microscope. Kolmakov hopes to adapt the concept for use in the physics and nanotechnology lab.

“Inside the environmental cell are the real-world conditions,” said Kolmakov, who is developing his own ultra-thin membrane cells for the task. “The thinner membranes will allow more electrons to escape into the vacuum, not just the higher energy ones, where we can observe them.”