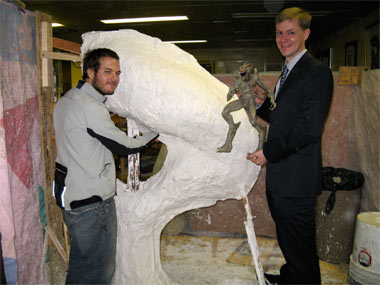 Beware of ‘Pumpkinhead’ this Halloween

But, for Southern Illinois University Carbondale doctoral student Patrick Novak, “Pumpkinhead” is a fascination, a dream of a character to portray. And, he’s getting the chance to do so this Halloween like never before, thanks to a lot of help at SIUC.

Novak discovered the costume, from the directorial debut movie of award-winning special effects master Stan Winston, in a Chicago costume shop and knew it was something special. Rather than renting the costume from the 1988 horror movie, he plunked down a sizeable bit of his teenage earnings to purchase the piece of classic Hollywood memorabilia.

Every Halloween since 1995, Novak has become Pumpkinhead, serving up chills and frights wherever he’s gone, often winning prizes along the way. But Father Time and wear and tear have had their impact on the creepy latex rubber costume. Thanks to the efforts of workers at the Student Center Craft Shop and some help from the theater department, Pumpkinhead returns in 2009 bigger and better than ever before.

The creepy “pumpkin” head and arms are still original. Novak has used some bits and pieces from the costume’s torso to enlarge the arms, enabling him to wear the scary appendages with the long black and white claws. But, after years of super-gluing the spiky claws to his own feet and walking uncomfortably on tiptoe when in costume, Novak decided it was time to do something. So, he came to the Craft Shop for a pair of true Pumpkinhead legs.

Ron Dunkel, coordinator, said he and the Craft Shop crew often help people with special projects including tables, furniture, custom framing and other assorted crafts. (Call 618/453-3636 or e-mail craftshp@siu.edu for details.) Novak, who earned his bachelor’s and master’s degrees in education at SIUC, long wanted to revitalize Pumpkinhead but held off for financial reasons. Now, as he’s wrapping up his final year on his doctorate, he knew the time was right to fund it.

Joining Novak and Dunkel on the project at the Craft Shop is David Gladish, along with graduate student Kristen Wykret and undergraduate students Matthew Coleman, Luis Camargo, Cristina Hernandez and Joshua Maxwell. Step one was creating a wooden armature and then modeling the gigantic sinewy legs from oil-based clay. They applied plaster on top to create molds and then they’ll pour long-lasting polyurethane rubber into the molds to create the legs.

The design for the huge bent legs actually places the knees about three feet in front of the upper and lower legs, making it truer to Winston’s design and also allowing insertion of stilts at the back of each leg, Novak explains. He said in the film, puppetry depicted the legs because humans couldn’t walk in the original design. But, the new legs under creation match those shown in the film and on the Pumpkinhead models.

Novak will walk on the stilts. Caitlin Entwistle, manager of the University’s costume shop, has designed a black raw silk shroud to conceal Novak’s human legs.

It’s been a massive undertaking for all involved.

“This is truly a team effort,” Novak said. “It’s not possible to reconstruct a Hollywood classic without having a team of truly talented people who work together well and can accurately communicate their ideas with each other. It’s nothing short of amazing that one of Stan Winston’s creatures is being born again this Halloween at SIUC.”

“This thing is huge, it’s so massive,” Dunkel said. It’s been such a big project, they’ve actually hired extra help at the Craft Shop and it’s provided not only income but also valuable experience for those who’ve helped, Dunkel said. For hours and hours over the past several weeks, they’ve labored, staying true to the creation Novak believes is Winston’s “best creature.” He’s convinced Winston spent at least a decade, if not longer, perfecting the costume.

Winston, who died in June 2008, won numerous awards for make-up, special/visual effects and directing. He had a hand in a wide range of monsters and creatures, from the dinosaurs of “Jurassic Park” to the beings in “Aliens,” “Predator,” “Terminator 2: Judgment Day,” “Batman Returns,” “Star Wars,” “Edward Scissorhands” and many more.

Despite extensive searches, Novak hasn’t managed to find a record of any other surviving Pumpkinhead costumes from the 1988 film or its sequels. Although the movie flopped when released, it has become something of a cult classic since. There currently is no appraisal of the value of the costume, Novak and Dunkel say Pumpkinhead could be quite valuable.

Almost nine feet tall, Pumpkinheard is a horrific vision. The “demon” was unleashed at the behest of a storekeeper seeking vengeance against a group of city teens who accidentally kill the man’s son on their trip to the country. Nevermind that some of the artisans resurrecting Novak’s Pumpkinhead, like Matthew Coleman, a senior computer engineering student from Carbondale, say they’ve seen this monster before “only in my nightmares.”

“This IS Patrick’s monster,” Dunkel said.

“Now, the scariest part of the costume is wearing it,” Novak said with a chuckle as he looked at the huge stilt legs he’ll be wearing. He’s been practicing walking on stilts and will be wearing protective gear under the costume -- just in case. But, he’s quite anxious to become the new and improved Pumpkinhead for Halloween weekend 2009 and see the wide-eyed reactions of those he stalks past. Pumpkinhead may even return to haunt the Craft Shop again soon; work on the remaining fragile pieces may be in the cards. 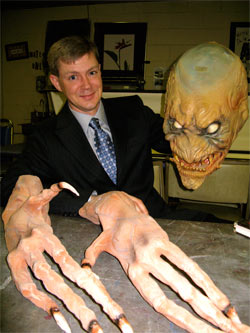 Hollywood costume -- Patrick Novak, a doctoral
student at SIUC, displays the head and feet from his
Hollywood movie costume "Pumpkinhead" in the
University's Student Center Craft Shop. Work to
create new legs for the costume is under way at the
Craft Shop. Pumpkinhead is the creation of Stan
Winston, the late award-winning visual/special
effects and makeup artist and director. (Photo by
Christi Mathis) Download Photo Here