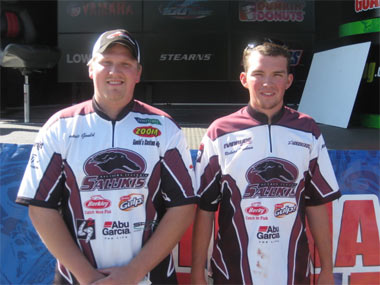 CARBONDALE, Ill. -- After casting their lines all morning and only pulling one fish into the boat, Richard Dunham and Travis Gould altered their strategy.

“We had really struggled that morning,” said Dunham, a senior business entrepreneurship major from Waukegan. He and Gould, a senior radiologic sciences major from Vandalia, had only one “keeper,” caught by Gould, in the boat with just two hours remaining. Dunham had lost a three-pounder on his second cast and their situation wasn’t getting any better.

“That’s when we scrapped our original plan and went to slower baits. In the last two hours I caught four keepers and Gould caught another good one right at the end,” said Dunham, son of Bill and Teddi Dunham. He said they figured a cold front coming through had changed the picture, so they changed their strategy.

Gould, son of Ron and Tena Gould, and Dunham watched as each of the 40 competing teams weighed their catches. Each teammate can count only three fish so the SIUC pair weighed in five fish with a total weight of 11 pounds, giving them hope they would place in the top five since the top five from each tournament advance to the regional. Actually, the catch by the two from the Saluki Bassers, a Registered Student Organization (RSO) at SIUC, was good enough for second place. They were beaten only by Murray State’s team.

“It was huge that we won that,” Dunham said. He notes that the Saluki Bassers team members often pay their own way for tournaments, and the gas and lodging costs add up. The prize money will help cover those expenses for teammates attending future tournaments.

“We call ourselves a club but we’re also a team. We fish against each other but we also meet often and share tips and help each other,” said Dunham, president of the Saluki Bassers. The group formed in the spring of 2004 and currently about 30 men are members. Dunham and Gould also expressed appreciation to Strike King Lures, Tackle Warehouse and Lake Fork Tackle for providing product discounts, as they note fishing can be an expensive sport. Recently, Dobyns Rods joined the sponsor board.

Just 20 teams will compete in each regional. Again, the tournament provides a boat and a professional fisherman as driver. During the qualifying tournament, one of 20 held around the country, Gould and Dunham say they had a lucky draw. They got Dion Hibdon, a top competitor in the sport, as their driver. Hibdon is a past winner of the Bassmaster Classic and the Forrest L. Wood Cup.

“Qualifying for the next tournament was our main goal going into this tournament. There have been months of preparation for all of these tournaments. It is a huge relief to finally qualify. We are very proud to be competing for the University and ecstatic about raising the money for the club,” Dunham said.

When Gould and Dunham compete later this month, the format calls for all 20 boats to fish the first two days and then only the top five teams will take to the lake the final day.

“Obviously, we want to win this thing!” Dunham said with a chuckle. “Bringing back a boat for the club would be major. It’s going to be tough though. Murray State really knows Kentucky Lake and their team is really good. They are our biggest competition. They were the team that finished first in the Ozarks tournament. However, in the qualifier at Kentucky, we tied them. Our plan is to go back into the creek arms and throw crank baits and jigs. The shad should be moving to the backs of the coves to spawn. The bass will be right behind them. We are shooting for 15-20 pounds per day. That should at least get us into the top five.”

“Many people think that bass fishing is easy or that there is a lot of luck involved, but to compete at this level requires a lot of dedicated practice and learning on the water. I’m very proud of how well these guys did!” said Edward J. Heist, associate professor of zoology and faculty advisor for the Saluki Bassers RSO.