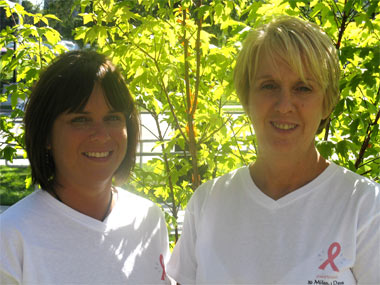 Walking toward a cure -- Southern Illinois University Carbondale employees Elyse Hiller, left, and Lisa Geissler will be among the many participants walking more than 39 miles later this month during the “Avon Walk for Breast Cancer” in Charlotte, N.C. The two women each raised more than $1,800 in donations to participate in the Oct. 24-25 walk. Hiller is a financial aid adviser in SIUC’s Office of Financial Aid; Geissler is a telecommunicator with the University’s Department of Public Safety. (Photo by Pete Rosenbery) Download Photo Here

CARBONDALE, Ill. -- What started as an early morning exercise routine while Elyse Hiller and Lisa Geissler were on a Florida vacation this summer will now benefit breast cancer research.

The two Southern Illinois University Carbondale employees each raised $1,800 through donations and will participate in a two-day walk for breast cancer in downtown Charlotte, N.C. Along with some friends, the two are paying their own expenses to be part of the “Avon Walk for Breast Cancer,” Oct. 24-25.

Geissler is a telecommunicator with the University’s Department of Public Safety; Hiller is a financial aid adviser in the Office of Financial Aid. The Queen City course awaiting the two covers up to 26.2 miles on Saturday, with another 13.1 miles on Sunday. The goal is to complete the entire 39.3-mile walk, Geissler and Hiller said.

One of the friends who walked with Hiller and Geissler this summer while on vacation lives in South Carolina, and convinced the two women to join her and another friend in participating in the Charlotte event. The Avon Foundation holds numerous walks throughout the country in cities including New York City, San Francisco, Chicago, Houston, Washington, D.C., and Boston.

“For what the women go through for the treatment of breast cancer, this is the least I can do -- to walk and help raise money to try and find a cure,” said Geissler, who lives in Carbondale. Geissler said there is a history of breast cancer in her family -- something she thinks about each time she goes for a mammogram.

Hiller said she and Geissler agreed that participating in the walk would be fun, and it’s for a good cause. Hiller said she has a cousin who recovered from breast cancer, and a close family friend who recently died from complications of breast cancer.

“It’s a big commitment but it’s worth it,” said Hiller, who also lives in Carbondale. “It’s a good cause and it’s going to help people.”

Hiller said she walks with co-workers during lunch on a daily basis, while Geissler didn’t walk regularly prior to this summer. The pair walked as much as 12 miles at one time, and tried to walk five to six miles, three times a week.

The regimen slowed a bit with the start of school and extracurricular activities involving their children. And with the days getting shorter, much of their walking is limited to the weekends.

“It feels good getting into shape. I enjoy the exercise. This must be my mid-life crisis; I’m not sure,” Geissler said with a laugh.

The two walked near numerous ballparks in the region while their daughters played softball, and also walked several miles during the hottest days of summer.

Hiller said she enjoyed walking all over Carbondale, particularly in the neighborhoods and looking at the different houses.

“It’s relaxing. Walking is an exercise that anyone can do. You can go at whatever pace you want to go at. If you want to be competitive, you can go faster,” she said.

Hiller and Geissler also recall the few odd moments and quirky unsolicited comments they received while walking. Once, a woman pulled up in her vehicle and asked whether they wanted a ride to a local grocery store. While walking toward the Southern Illinois Airport, they received advice to get a stick to chase dogs away. They also had a water balloon thrown at them.

“People had to wonder what we were doing. It’s all hours of the days and evening we were out hiking along,” Geissler said.

According to the Avon Foundation, donated money is used for grants “awarded to local, regional and national breast cancer organizations to support five areas of the breast cancer cause, including awareness and education; screening and diagnosis; access to treatment; support services; and scientific research.”

Hiller and Geissler are still accepting donations. Go to the Avon Foundation Walk for Breast Cancer site, avonfoundation.org and click on “donate.” You may donate via credit card to either Hiller or Geissler’s efforts following the instructions on the Web site to get to their personal pages.