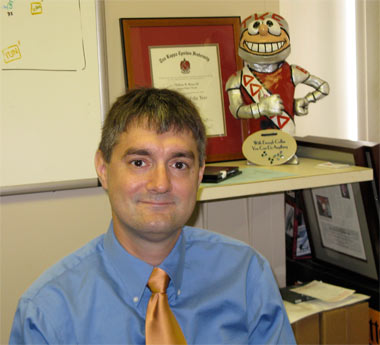 When you were a youngster, what did you want to be when you grew up? When I was six I wanted to be a sketch artist. My parents’ friends would give me money (a buck or two) for my drawings. But then I compared my drawings to those of a first-grade friend of mine who was naturally talented. I realized for the very first time that my horses looked like rats, my chairs were missing legs and my trees looked like sick shrubs. Sadly, I discovered that I am not talented at art. I cannot draw, shade or match colors to save my life.

People don’t know that: Our son is named in honor of all who died in the World Trade Center. My wife, Debbie, is from New York City and I lived there for seven years. My son Will’s full name is William Thomas Charles Bruns. Eight months into the pregnancy, Debbie and I were still considering all three names in various combinations, or possibly two of the three. William is for me, my father, my grandfather and my great-grandfather. Thomas is for the Rock Opera “Tommy” (by The Who) and Charles is my great-grandfather that I grew up with and who taught me all things Chicago Cubs. Then, on Sept. 11, 2001, our World Trade Center was destroyed. William Thomas Charles =WTC =World Trade Center.

If you could choose another profession, what would it be and why? I still love television production. In the late 1980s I worked at the Children’s Television Workshop on a show called “Square One TV.” My favorite segment that they worked on was “One Billion is Big” with the Fat Boys. http://www.youtube.com/watch?v=TdnLhN4SeYY.

What was the first “album” you ever bought, and was it an LP, 8-track or CD? I joined the RCA Music Club when I was 13. My three of the first four albums that I got together for a penny were by Kiss (Destroyer, Love Gun and Rock n Roll Over.) The other was Aerosmith (Rocks.)

What is one random fact about you? Growing up in Indianapolis and watching the ABA’s Indiana Pacers (think Will Ferrell in “Semi-Pro”) at an early age, I didn’t realize that most of the country didn’t play basketball with a red, white and blue ball until I was 11 years old.

What is your favorite food and why? I like breakfast for dinner. Eggs, bacon, toast, grits and orange juice at 6 p.m.

What is your pet peeve? My sister and father are both editors, so I’d have to say that my biggest pet peeves are tyops and mispeelings.

What would you like your gravestone to say about you? Don’t look here for his body. He was cremated and spread at home plate at Wrigley Field.

Favorite cartoon character? Why? I like Wile E. Coyote because he is unusually determined and single-minded about his goals (to catch the Road Runner) and no matter how many times he fails (usually by getting crushed by a rock, blown up by dynamite or falling off a cliff) he gets up, brushes himself off, and tries again.