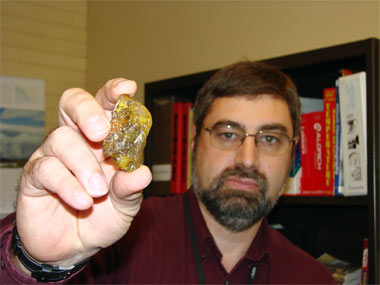 Scientific beauty -- Ken Anderson, professor of geology at Southern Illinois University Carbondale, holds a piece of amber in his office at SIUC. Anderson’s recent discovery of the oldest amber on record, and its implications for the understanding of the evolution of plants, are featured in an article in the journal “Science,” released today (Oct. 2). (Photo by Tim Crosby) Download Photo Here

CARBONDALE, Ill. -- Amber, the fossilized remnants of tree resins sometimes worn as jewelry, has a special place in many cultures throughout history.

Revered by the Norse and believed by the Romans to hold the key to eternal life, gladiators wore it in their armor for protection. The Greeks called it “electrum,” owing to the static electric charge one could achieve by rubbing it on a piece of fur. Some cultures to this day sew buttons made of amber on the clothes of their elderly, believing it will help keep them in good health.

A Southern Illinois University Carbondale researcher’s recent discovery of the oldest amber ever recorded is shedding new light on this special material and how it is tied to ancient life on Earth.

Research by Ken Anderson, professor in the Department of Geology in the College of Science, on tiny pieces of amber found embedded in Southern Illinois coal is revolutionizing the way scientists view plant evolution. The results of Anderson’s work are published today (Oct. 2) in the journal “Science.”

The research shows the 320-million-year-old Southern Illinois amber Anderson and his graduate students found is extremely similar to resins found today, providing an unexpected direct evolutionary tie between modern trees and ancient tree-like plants. The find will cause scientists to question the prevailing view that plants only developed the ability to make resins -- a defense mechanism for plants -- later in the evolutionary process.

The discovery provides a precious tie and rare view into the ancient past, well before even the dinosaurs, when scientists believe plants were making their way onto dry land and creating the first forests on Earth.

“At that time, 320 million years ago, there weren’t anything like the kinds of trees we see today,” said Anderson, an organic geochemist who has studied various ambers from all times and places for the past 20 or more years. “We’re talking about a time when plants were very primitive, ferns and fern trees and such. Nothing that looked like a pine tree or spruce, and certainly nothing like a hardwood.

“What this shows is that the kind of resins in modern plants are remarkably like the ones we found that are 320 million years old. It shows resins were developed very early on in the evolution of plants and that the ability to produce resins was preserved by plants, even as most everything else about plants changed and evolved. We’ve found that resins were a very early evolutionary step, and that’s a big surprise,” Anderson said. “It’s going to require us to rethink some of what we thought we knew.”

Anderson’s office is filled with scores of amber samples he’s collected from all over the world, from the arctic and all continents. In its raw form, ambers take on many different appearances, from milky white, to tan to clear. Some types take a fine polish suitable for jewelry.

Ambers come from tree resins made of terpenes, a chemical compound. The resins perform several functions for the plant, including acting as a sort of bandage by sealing up wounds caused by damage or insects. The terpenes composition also makes the resins sticky, pungent and bitter, discouraging animals from foraging on the tree or its seeds.

The resins harden quickly and once they become amber, it is amazingly durable, hanging around long after the tree itself is dead, rotted or turned into coal. Previously, the oldest confirmed terpene-based ambers dated to about 150 million years ago, making Anderson’s find more than twice as old.

Anderson, along with his former graduate student, Paul “Sarge” Bray, and others, found the ancient amber samples about two years ago while working on an unrelated coal project. While gathering samples at an undisclosed location, Bray spotted a chunk of coal with some tiny specks in it.

Handing it to Anderson, Bray asked, “Is that what I think it is?” After a quick examination with a field lens, Anderson excitedly replied, “I think it is!”

A week or so later, the two successfully isolated the amber and began running an analysis aimed at deciphering its chemical fingerprint so as to characterize its composition. One evening, Anderson left Bray running analysis at SIUC’s Parkinson Laboratory and returned in the morning to find a ragged piece of paper bearing a series of numbers taped to his office door.

“I remember being mildly irritated while I was getting my keys out to unlock my office, wondering who was taping scraps of paper to my door,” Anderson said. “When I realized the paper was from Sarge, and what the numbers meant, I dropped my keys.”

The numbers compared the terpene distributions between the ancient amber and other amber samples they already had studied. The results showed the substances were very similar.

“We knew this was big, so we kind of took a breath,” Anderson recalled. “Extraordinary claims require extraordinary evidence, so we knew we had to do things right.”

Anderson worked with Bray to plan an entire series of tests and experiments to validate their findings. They faced many challenges, not the least of which was the sheer lack of material to work with. Despite a day of scouring the coal seam for more embedded amber, the group only found a handful of samples, each of which were only a few millimeters wide.

The world looked much different when the ancient amber formed during the Paleozoic period in what is now Southern Illinois. It was much warmer and wetter, with giant amphibians and insects roaming the newly forming forests.

Over millions of years, the primitive plants gave way to conifers, cone-bearing trees like pine, spruce and fir that dominated during the Mesozoic era when the dinosaurs lived. It was during this time that scientists previously believed trees developed resins as a defense mechanism -- an idea now strongly challenged by Anderson’s work.

Angiosperms, which include hardwood varieties of trees, didn’t emerge until very late in this period. Surprisingly, however, the ancient resins Anderson discovered are very similar to resins from this variety of tree, even though such trees did not exist when the amber was formed.

“This is telling us that resins are a very ancient function that plants have retained and kept more or less the same, even while everything else has changed,” Anderson said. “Over the last 320 millions years, plants have evolved a lot and the world has changed. We’ve had very large extinction events and huge climate swings, but these resins haven’t really changed much.

“Apparently, these resins were very successful and therefore gave the plants that had them a slight advantage and so was a trait preserved throughout evolution,” he said. “Nature seemed to get it right very, very early in this case, and held onto a characteristic that worked.”