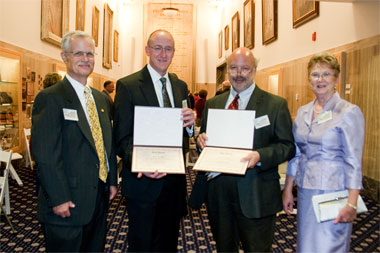 CARBONDALE, Ill. -- John Griswold and Gordon Pruett are the winners of the 2009 Delta Awards, presented by the Friends of Morris Library at Southern Illinois University Carbondale.

The awards presentation was in conjunction with the group’s annual dinner last month. The Delta Award recognizes those who write, edit, or publish with distinction about Southern Illinois. Since the award’s inception in 1976, more than 100 people have earned the honor, including Paul Simon, Virginia Marmaduke, Richard “Dick” Clayton Gregory, Robert Coover and John Y. Simon.

Griswold won for his historical novel “A Democracy of Ghosts,” about the 1922 event dubbed the Herrin Massacre. Pruett’s honor was for his work as publisher with Crossfire Press and as editor of the Shawnee Classics with SIU Press.

Griswold teaches creative writing, literature and rhetoric at the University of Illinois at Urbana-Champaign, his vocation since 2000. A lecturer, he won the university’s Award of Excellence in Undergraduate Teaching by Instructional Staff in 2009. Reviews of “A Democracy of Ghosts” compare it to the works of John Steinbeck, John Dos Passos and Upton Sinclair.

Pruett founded Crossfire Press in 1989, dedicated to the reprinting of rare, out-of-print books relative to the region. He continued his vision with the Shawnee Classics at SIU Press. Pruett also chronicled Herrin’s history for its 2000 centennial with a book and a 40-minute video.

Griswold and Pruett are Herrin natives. Presenting them with the awards was David Carlson, dean of library affairs at SIUC and Thyra Russell, vice president of the Friends of Morris Library.

The Friend of Morris Library continues its 50-year support of the library, accomplished in many ways including hosting events, contributing to endowments, purchasing materials including books, computers and software, by underwriting a variety of other activities. The friends are currently raising funds for construction of a courtyard patio for the east side of the newly renovated and expanded Morris Library.