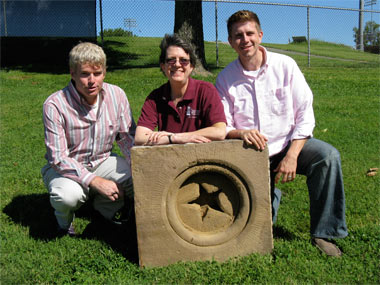 CARBONDALE, Ill. -- After more than 100 years away, they’re coming home.

Two carved stones that were once part of Normal Hall, the first structure of what has become Southern Illinois University Carbondale, are now back on campus thanks to the generosity of a local church. Oddly, the two, 3-foot-square sandstones, which feature hand carved five-point stars in the middle, have for all of this time been just a few blocks away from the University.

Built for $265,000 in 1874 to house Southern Illinois Normal College, Normal Hall was of Gothic style architectural and included a number of special features. Among them were pointed windows topped by star stones. The Boskeydell quarry was the source of the stone and historians say workers likely carved the design at the construction site.

But, fire destroyed the building in 1883. Later known as Old Main, the rebuilt structure had a new design and new materials. Meanwhile, pieces of Normal Hall scattered. The First Baptist Church built Carbondale’s first stone church in 1902 and its design incorporated three of the large window tracery star blocks from Normal Hall. The two square blocks graced the church tower and the octagonal block found a home above the University Avenue church entrance.

The View congregation now calls its brand new building on Giant City Road home, as the old church building is no more. The church incorporated the octagonal star stone into the new building’s foyer or “gathering place,” installing it in a prominent spot above the fireplace, according to Josh Swain, senior pastor. And, members decided that after carefully caring for the other two sandstone slices of SIUC history for more than a century, it was time to send them back home again.

“The stones had originally been a part of the University so it seemed only fitting, as our old church was torn down, that the stones should return to SIUC. For generations, our church has had a strong connection to the University,” Swain said.

The church donated one stone to the University Museum and the other to Morris Library. Kristine McGuire, library development officer, was on hand to accept the donation on behalf of the library. Eric Jones, University Museum registrar, was also in attendance for the formal donation of the ornate 135-year-old stones.

Library officials haven’t decided the stone’s permanent home for sure but say it’s likely they’ll incorporate it into the new patio coming to the southeast side of the library. Already, plans call for using stone pieces that were once part of the Old Main building before fire ravaged it too, according to David H. Carlson, dean of Library Affairs.

It is also undetermined as yet where the museum stone will go, although Dona Bachman, museum director, said it may join other University treasures in the archives when not on display in an exhibit.

“The important thing is that the museum will preserve the stone for generations to come,” Bachman said.