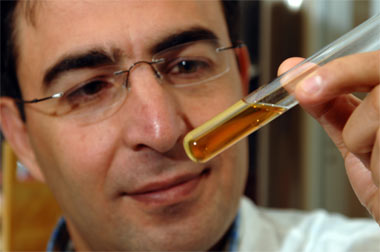 Totally tubular -- Amer AbuGhazaleh, a researcher in Southern Illinois University Carbondale’s College of Agricultural Sciences, eyes a test tube filled with growing media and lactic acid bacteria. The bacteria respond to toxins in milk by producing little or no lactic acid, a trait AbuGhazleh uses to determine whether milk has been contaminated. (Photo by Russell Bailey) Download Photo Here

CARBONDALE, Ill. -- If bad guys or bad bugs are poisoning food, maybe some good bugs could spill the beans.

Amer AbuGhazaleh, a researcher from Southern Illinois University Carbondale’s College of Agricultural Sciences, and Salam Ibrahim, a food microbiologist from North Carolina Agricultural and Technical State University, have shown that the combination of certain bacteria and a common purple dye can reveal the presence of toxins in milk in just a few hours.

“To date, detecting the presence of toxins or pesticides has only been possible by sending samples to a laboratory and waiting a few days for the results,” AbuGhazaleh said.

“An important step toward improving the safety of our dairy supply would be the development of an effective, simple and rapid test that would allow farmers or processors to detect the presence of foreign substances.”

AbuGhazaleh and Ibrahim first began thinking about developing a way to detect tainted milk quickly in 2007, after a series of food recalls shook the country.

“We were surprised at how much damage that caused, and people were so frightened,” AbuGhazaleh remembered.

The pair also harked back to fears, generated after 9/11, of mass poisonings caused by bioterrorists.

“It seemed like it wouldn’t be hard to contaminate the food supply -- intentionally or unintentionally -- especially with the poor level of security on the majority of farms today,” AbuGhazleh said.

They started with milk in part because AbuGhazaleh specializes in dairy cattle. But they also knew the milk supply was particularly vulnerable.

“A single load of contaminated milk from one dairy could spread that contamination quickly across a wide area as it mixed with milk from other dairies at the processing plant,” AbuGhazaleh noted.

After tossing around some ideas for a simple detection system, the scientists decided to focus on the bacteria that ferment lactose (milk’s sugars), producing lactic acid as they go.

“For one thing, these bacteria already exist in milk, so if you add some, you’re not doing anything strange,” AbuGhazaleh said.

“Second, they produce a change over time (the lactic acid) that we could monitor. If we didn’t see the change, we would know something was wrong.”

They began in 2008 with a few bacterial strains they already had and cyanide, also readily available. Experiments showed not only that the toxin could slow or stop lactic acid production but that this effect increased with the toxic load. Further, the effect appeared in less than four hours.

They then added purple dye to milk samples containing both toxins and bacteria and to samples containing only bacteria. After eight hours, dye in the non-toxic milk turned yellow, indicating the presence of increased lactic acid, while dye in the toxin-laden milk retained its original purple.

“This kind of color test could be performed by farmers themselves,” AbuGhazleh said.

“They could add the bacteria and the dye to a sample, leave it alone for a little while and then come back to see if there is any change in the color. If there isn’t, there are problems with the milk.

“The test won’t tell us what sort of toxin is in the milk; it only tells us there is something wrong. It’s like an alarm.”

Such an alarm could save society billions of dollars. In 2005, Stanford University researcher Lawrence M. Wein and then-graduate student Yifan Liu developed a mathematical model predicting what would happen if terrorists slipped four grams of botulinum toxin -- roughly the weight of a sugar cube -- into a single dairy holding tank, tanker truck or processing silo in California.

Their model showed that 400,000 people would sicken; some of those would die. The cost of treating the victims, the researchers said, would run to “tens of billions of dollars” -- and that does not include the further costs of tracing, recalling and discarding milk nor the effect of reduced milk purchases by frightened consumers.

With funding from the Illinois Council on Food and Agricultural Research, AbuGhazaleh and Ibrahim now are expanding their study to include a wider range of bacteria and toxins.

“We want to see if there are bacteria that are more sensitive to toxins, which would allow us to see the effect in less time,” AbuGhazaleh said.

“We also want to find that ‘universal’ bacteria that would be sensitive to a wide range of toxins.”

AbuGhazleh presented the preliminary results in 2008 at the annual meeting of the American Dairy Sciences Association in Indianapolis.

“There was a lot of interest, particularly in potential commercial applications,” he said.

“That’s the main thrust of this project, but long term, we think the concept -- using naturally occurring microbes to detect contamination -- might extend to other food industries.”