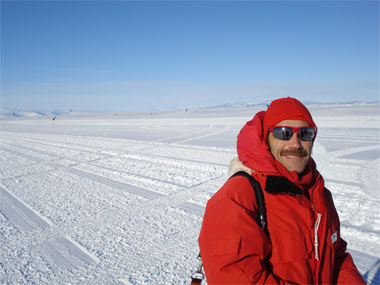 Science on ice -- Southern Illinois University Carbondale researcher Scott Ishman surveys the landscape of Antarctica during an earlier scientific trip to the bottom of the world. Ishman, an associate professor of geology at SIUC, will leave for Antarctica early next year, where he will serve on a team of researchers examining the effects of climate change on the local ecosystem. (Photo provided) Download Photo Here

CARBONDALE, Ill. -- A researcher at Southern Illinois University Carbondale will leave for Antarctica early next year, where he will serve on a team of researchers examining the effects of climate change on the local ecosystem.

Scott Ishman, associate professor of geology in the College of Science, is a frequent visitor to the bottom of the world, making several trips there during the last few years to study the effects of a disappearing ice shelf and the existing undersea fossil record.

This time, Ishman is working on a 24-member, international team of scientists in a project funded by the National Science Foundation’s Antarctic Integrated System Science Program. The five-year, $3 million project -- Ishman’s share is $250,000 -- will begin its first trip in early January, staying on station for two months while researchers collect samples and data in the area of Larsen Ice Shelf, which has broken up and disappeared in recent years.

“We’ll be looking at how the breakup of the shelf is affecting the whole system there,” Ishman said. “The whole idea is to examine how climate change is affecting the system and how we correlate what’s happening on land with what’s going on in the ocean.”

The team, which includes researchers from the United States, Argentina, Korea, Ukraine and Belgium, is divided into specialized groups. One team will work on the ice, drilling and recovering cores for examination. Another will look at the glacial geology where the ice shelf used to be and another includes marine biologists, who will examine the current sea life in the area.

A team from National Geographic magazine consisting of a writer, videographer and photographer, also will make the trip.

Ishman’s team will look at the marine sediment, which holds a record of life in its stratified layers lying beneath the frigid waters. By taking core samples of sediment, Ishman’s team can look back in time to examine how life in the ocean has changed during the last 10,000 to 20,000 years and how those changes might relate to past climate changes as well as the current changes.

No one has really documented what is happening to the ecosystem near the site where the Larsen Ice Shelf once sat, Ishman said. The area is home to penguins, seals, orcas, right whales and a plethora of other animals. The absence of the ice may cause profound changes in that system from the smallest creatures to the largest.

The food chain in the ocean starts with phytoplankton, which is consumed by krill, a small crustacean and another key food source for larger animals. Ishman says less ice may mean fewer krill, for several reasons.

“Once the ice shelf leaves it really changes the whole ecosystem’s dynamics,” he said. “Sunlight now reaches the surface of the ocean, and so for example you start to get a lot of production at the surface. That production rains down on the sea floor and changes the chemistry of the sea floor, which can have a pretty profound impact on the organisms living there.”

Previously, the fresh water ice in the area would melt at a certain time each year, spilling important minerals and nutrients into the ocean at the same time sunlight is available. The fresh water ice melt also caused a layering effect with the saltwater ocean, helping concentrate the nutrients near the surface and promoting phytoplankton blooms to feed the krill. That dynamic is now disturbed and the scientists want to know what effect that may have on local organisms.

Ishman’s team will use a sediment core retrieval apparatus lowered overboard from their ship. As the hollow, pipe-like unit sits on the sea floor, its weight slowly sinks it into the sediment. They will then close a lid on the bottom of the coring unit and haul the sample back on board.

The researchers will take a series of such samples; the biggest -- and therefore the one looking back farthest in time -- will be about 20 meters long. At the end of the expedition, the longer samples will find a home at Florida State University, where Ishman and the other researchers will discover their secrets a few centimeters at a time.

Such samples allow the scientists to time travel and gain a snapshot of life in the area in the past, including during previously known warm and cold periods on Earth, such as the Little Ice Age and the Medieval Warm Period, and possibly relate those to current climate change effects.

Ishman hopes the project’s findings will be applicable on a larger scale, telling scientists something about the overall impact of climate change globally.

“We’re using this as kind of a microcosm that might also tell us about how this might affect things globally and socially,” Ishman said. “When you talk about periods such as the Little Ice Age and the Medieval Warming Period, those were events that really affected society at the time, but they were really due to changes in ocean currents and the way heat is distributed on the Earth. It’s possible we might be looking at one of these longer events, and many of us believe these are amplified by human activity. So it gives us an idea where we might be headed.”

Ishman’s portion of the funding will support his travel, analysis and graduate students, some of whom may accompany him on a second expedition planned for 2012. During the second trip, researchers will recover instruments they are leaving on site.