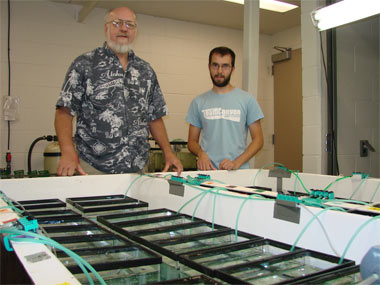 CARBONDALE, Ill. -- Don Sparling, associate professor of zoology at Southern Illinois University Carbondale, tapped a few grains of salt from a shaker of into his hand, demonstrating how little pesticide it takes to kill off a population of frogs.

Researchers have known since the mid 1990s that amphibian populations around the world are declining. Loss of habitat -- up to 95 percent of wetlands have been drained for the “corn desert” in states such as Iowa and Illinois -- and a virulent fungus, known as chytrid, are two big reasons. But a third reason, the one Sparling investigates, involves contaminants such as pesticides.

Sparling, a researcher and associate director of the Cooperative Wildlife Research Laboratory at SIUC, has been involved with the issue for years. The second edition of his textbook and reference, “Ecotoxicology of Amphibians and Reptiles,” is due out early next year. His most recent study was published in the August edition of “Environmental Toxicology and Chemistry.”

Sparling, along with other researchers, recently discovered that the same chemicals that make California’s Central Valley so successful as a farming area also make the nearby Sierra Mountains deadly for frogs. Specifically, the study looked at Pacific tree frogs and foothill yellow-legged frogs, both of which are native to the mountain meadows and are declining in population.

Sparling and the team found neurotoxin pesticides are finding their way up out of the valley and into the snow and eventually the streams where the frogs live and breed.

And the results are devastating.

Using laboratories at SIUC, Sparling and his graduate students found that as little as 0.3 parts per billion of endosulfan -- the active ingredient in many pesticides -- in water is enough to kill half of the frogs living in it.

“At 0.8 parts per billion, we lose all of them,” Sparling said, referring to the tiny amount of salt in his hand. “We always thought there was an association between pesticides and declining amphibian populations, and we’re building up a body of evidence to show this is the case.”

Sparling’s research studies the effects of “environmentally realistic” amounts of pesticides on amphibians, such as frogs. California’s Central Valley, with its great diversity of farming and heavy use of chemicals, along with its nearby mountains and declining amphibian populations, provided the perfect opportunity.

“The Central Valley is an extremely intense agriculture area, with everything from grapes to peaches, to nuts and tomatoes grown there,” Sparling said. “Along with that, you have literally hundreds of thousands of pounds of active-ingredient pesticides, this is before it’s diluted, applied each year in this area.”

Sparling and his colleagues looked at whether the pesticides were involved in the amphibian population declines there. A main question they faced involved finding out how the chemicals worked their way up out of the valley and up into the Sierras.

Using sampling techniques, the team found the chemicals were indeed making their way into the frogs’ environment, most likely by wind.

“These pesticides are applied by airplanes and we found that the wind would blow some of it up into the mountains, for instance,” Sparling said. “In other cases, these chemicals would volatize after being applied, turning into a gaseous state, which could also be picked up and spread into the mountains by wind.”

Timing was also a major factor in the damage caused by the chemicals. Chemicals applied in late winter and early spring would find their way into snows packed in the cooler mountain region. As the snow melted each year, the chemical released into the streams just as frogs begin to breed.

“As soon as ice is out of those streams, frogs start breeding,” Sparling said. “The newly hatched frog larvae are at their most vulnerable right at this time, when the chemicals are getting into the water.”

Chemical exposure causes death and abnormalities in the tadpoles, in some cases causing their signature long tail to develop off-center, resulting in an animal capable of swimming only in a tight circular “corkscrew” pattern that makes it easy pickings for a hungry fish. It also causes drastic differences in the rate of growth and other problems.

“The sub-lethal effects of chemicals are probably even more important than outright killing,” in terms of affecting the population, he said. “It’s more insidious.” Contamination levels far below the lethal range may cause such effects.
The foothill yellow-legged frog is especially susceptible to the chemicals such as endosulfans, which kill by essentially overloading the nervous system and rendering breathing muscles useless. Europe and Australia each have banned the use of the chemical as a pesticide, and the U.S. Environmental Protection Agency also is studying the issue, Sparling said.

Sparling is optimistic humans can find ways to both farm on a large enough scale to feed the population and protect non-pest animals.

“To produce crops to provide for the world we have to use pesticides, and I’m not anti-pesticide,” he said. “But it’s important for us as scientists, agriculturalists and environmental protectors to make sure we continue developing pesticides that are as protective as possible of non-target animals as can be, both in the chemicals we use and application methods.”

Sparling continues working on the issue, helping graduate students examine the effects of the interaction of the chemicals -- the cocktail neurotoxins -- on frog populations, looking at whether they interfere with one another, synergize or have an additive effect. He also is looking at the effect of each chemical on the mountain yellow-legged frog, a relative of the foothill yellow-legged frog that lives at higher elevations.

Monitoring the frog populations’ health is critical to humans as they seek to protect the environment from unintended consequences.

“Frogs are like the canary in the coal mine. They serve as early alarms for the environment,” Sparling said. “They also provide a large and important link between the aquatic and terrestrial environments. If amphibians go, a huge link will be gone.” 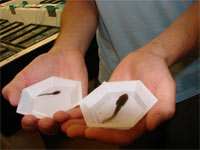 Growth difference -- Two tadpoles of
vastly different sizes swim in cups held
by Southern Illinois University Carbondale
graduate student David Dimitrie. The
specimens, which are the same type and
age, illustrate how pesticides can affect
growth rates in tadpoles. Dimitrie is
working with Don Sparling, associate
professor of zoology at SIUC, whose
research is pointing to the severe
consequences pesticides have on some
frog populations near California's Central
Valley. (Photo by Tim Crosby) Download
Photo Here