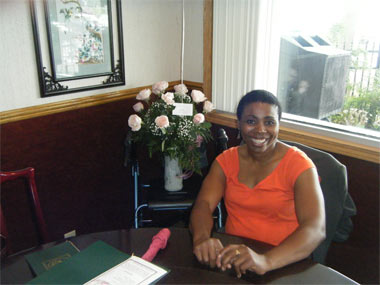 Oh, happy day -- With her “Atta Girl!” roses perched on her walker, Stella C. Iwuagwu beams after successfully defending her doctoral dissertation at Southern Illinois University Carbondale. Iwuagwu will use that walker to help her collect her diploma Aug. 7, less than two years after being paralyzed from the chest down. (Photo provided) Download Photo Here

CARBONDALE, Ill. -- Less than two years after a car wreck in her native Nigeria left her paralyzed from the chest down, Stella C. Iwuagwu will walk across the stage of Southern Illinois University Carbondale’s Shryock Auditorium to collect her doctoral diploma from the College of Education and Human Services.

In addition to her cap, gown and back brace, she will be wearing what she calls “the armor of determination” -- armor she first donned in a St. Louis rehabilitation facility as she set out on her long, painful quest for recovery.

“I told God every day, ‘I refuse to be helpless,’” she recounted a few days before graduation, as she sat in the wheelchair she still uses when faced with fatigue or really bad weather.

“‘I am going to walk again because Nigeria is not accessible. I can get around in America, but the work I do requires me to be in the field, and my office is on the fourth floor with no elevator. Being crippled is not an option.’”

A trained nurse, Iwuagwu, 39, founded and serves as executive director of the Center for the Right to Health (read more about it at www.crhonline.org), a non-profit advocacy group based in Lagos that works to make health care affordable and accessible to all Nigerians. It takes a particular interest in the poor, the uneducated and those with HIV.

In 2001, two years after she set up the center, Iwuagwu got the chance to attend an intensive summer course in Washington, D.C., dealing with human rights advocacy. Afterward, she took part in a United Nations General Assembly special session on HIV and AIDS in New York. Connections she made in the States eventually led to an offer from the Oprah Winfrey Scholars Program for African Women in Public Service to underwrite the costs of earning a master’s in non-profit management at New York University.

“I was giddy with joy,” Iwuagwu recalled. “Oprah had always been my hero; my dream was to be an Oprah for Nigeria. I never knew that she would be a part of my quest to fulfill that dream.”

The Oprah offer came as Iwuagwu’s health center was preparing to open a satellite in Abuja, a city of both fabulous wealth and startling poverty. If she didn’t take it, she wouldn’t get a second chance. But Abuja, since 1991 the capital city, was “the seat of power, the place to take advocacy for health,” she said.

“I wanted to be there to provide the needed leadership. I called a board meeting and said, ‘I can’t go. This is a crucial moment.’ They said, ‘God gave you that scholarship for a reason. You can’t solve all the problems now. They will still be here when you get back. We can get along without you. You go, and return with the knowledge and skills that can help us then.’”

So she went, she studied, she earned the degree. But once she finished, instead of returning to Nigeria, Iwuagwu decided she might as well go on and get a doctorate in health education.

“I’d get it over with so I’d never have to leave Nigeria again -- and they were getting along so well without me (back home),” she said, laughing.

An American mentor told Iwuagwu that SIUC had one of the field’s top doctoral programs, and so, though she’d never heard of the university and had no idea where it was, she applied, was admitted and in 2003 headed south from Chicago with a Michigan friend to enroll.

“We drove and drove and drove and drove, and I said, ‘My God, this is like the end of the world,’” Iwuagwu recalled. “But when we passed Marion and I saw the trees and the lakes, I was in love. I was going through so much (personal difficulty), and this environment wrapped me up with a sense of peace and calm.”

Three years later, Iwuagwu finished her coursework and was accepted as a doctoral candidate. She decided to focus her dissertation on Nigerian women living with HIV and in September 2007 returned home to do her research.

One evening, while being driven to an interview, she dozed off. The next thing she remembered was a loud bang. A collision? A blown tire? Pirates trying to force the car to stop? She never knew. But suddenly, the car somersaulted across the road and tumbled end over end down into a ravine. When she came to, she knew from the pain that she’d broken her back. Passersby eventually pulled her out of the car.

“I was taken to a nearby clinic because the big teaching hospital was on strike and couldn’t even do an X-ray,” Iwuagwu said.

“When I got to the big hospital, I told them my back was broken but nothing was done (to minimize the damage) — no backboard, nothing. They just put on a neck collar and did a cervical MRI. It wasn’t until the third day that they did a (full-spine) MRI and confirmed what I knew from the start: My back was broken.”

As Iwuagwu lay still in her bed in that Nigerian hospital, unable to move, sensation began to ebb from her toes, her legs, her hips, until at last she could feel nothing below her chest.

“It was like watching yourself die a bit at a time,” she said.

The hospital lacked the resources and expertise to perform the life-saving surgery she so desperately needed, so family, friends, co-workers and strangers worked together to get her moved.

“They rented an airplane and flew me to Ghana and had the surgery done the very next day,” Iwuagwu said.

Four weeks later, her informal support team sent her to the St. Louis Rehabilitation Institute, where she would spend two months in intensive, painful therapy trying to get her life back.

“Everyone was (depending on) me -- my staff, my clients, my aging parents with their own medical problems, my children -- and I lay there helpless,” Iwuagwu said, tears spilling from her eyes at the memory. “I couldn’t even turn over in bed or sit in a chair without falling out of it.”

And then there was the pain.

But Iwuagwu was wearing the armor of determination.

By December 2007, Iwuagwu was back in Carbondale, still actively working at therapy but bedbound much of the time. And she still had her dissertation to write.

The challenge involved in completing her dissertation loomed large. For one thing, the medication she took for pain made her drowsy. She had some memory problems, too.

“I’d look at the material and 10 minutes later, I’d be asleep,’” Iwuagwu said.

“Or I’d read an interview, but I couldn’t remember the person. I’d think, ‘How can I write this if I can’t connect with it?’”

A strategy materialized after she met SIUC sociology professor Kathryn B. Ward, who has long fought her own battle with multiple sclerosis.

“Kathy said, ‘You can do this,’” Iwuagwu recalled. “‘Take it one minute at a time, and do something with your dissertation for just 15 minutes a day.’

“Kathy also bought me some books on meditation. She said, ‘Stella, it’s going to come down to mind over body.’ So I started meditating. It was hard for me to sit still, much less quiet my thoughts, because I had been a Type A Plus Plus.”

Iwuagwu set herself a goal. She would graduate in May 2009. A friend -- aptly named Faith -- who had attended to her physical needs after Iwuagwu returned to Carbondale became her study buddy, working with her two or three times a week.

“Gradually, a bit at a time, I was able to read the transcripts and analyze the material and do the write-up, and every little success encouraged me,” Iwuagwu said. While she didn’t make her May graduation deadline, she successfully defended her dissertation June 29.

Iwuagwu had another goal, too. When she received her diploma, she wanted to walk across the stage on her own two feet. Physical therapist Kim Booker worked hard to help her do it.

“She had me start standing when I could barely sit,” Iwuagwu said. “She would ask me to do things I didn’t think I could do, but I would try, and I would do it. I would be shaky at first, but after five or six times, I’d be saying, ‘Bring it on!’”

Iwuagwu had hoped to walk across the stage unaided, but she’s not quite there yet. On Friday, Aug. 7, she’ll use a walker to make her slow way toward her future.

“But I’m not rolling down that stage (in the wheelchair) -- I’m walking!” she said with obvious glee.

“I’m going to stand tall and walk tall. I want the house to come down with praise to God almighty and the people who have helped me.” 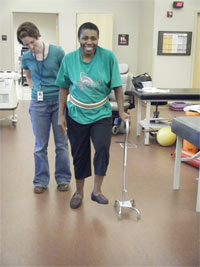 You go, girl! -- With the help of therapist
Kim Booker, Stella C. Iwuagwu takes a
step. Though some feared she would
never walk again after a car wreck left
her paralyzed, she will cross the stage
Aug. 7 to collect her doctoral diploma from
Southern Illinois University Carbondale on
her own two feet. (Photo provided)
Download Photo Here