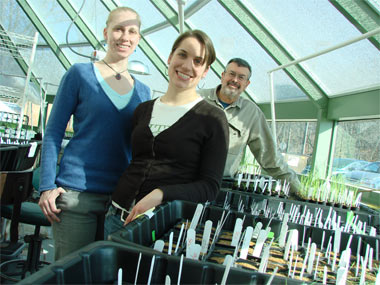 Green thumbs -- Dale Vitt, right, professor and chair of the Department of Plant Biology in the College of Science at Southern Illinois University Carbondale, pauses while working with two of his students in the University’s phytotron facility. Vitt is working with Rose Bloise, left, a doctoral student, and Sara Koropchak, a master’s student, on a massive oil shale mining reclamation effort for Syncrude in Canada. They are growing and studying plants native to the area in Canada where they are working in an effort to find the best types to put there. (Photo by Tim Crosby) Download Photo Here

CARBONDALE, Ill. -- A researcher at Southern Illinois University Carbondale is working with the Canadian oil and gas industry to take land reclamation to a higher level.

Dale Vitt, professor and chair of the Department of Plant Biology in the College of Science, is working with Syncrude, a joint venture of oil and gas companies mining the oil sands in Alberta. The project -- part experimental research, part environmental remediation -- involves turning gigantic open sand pits created by the extraction process into a rolling, lush landscape.

While land reclamation has long been a common practice among mining companies in North America, Vitt says no one has attempted a project of this magnitude.

“This is more challenging and on a larger scale than anything else, and it’s way beyond reclamation,” Vitt said. “Where reclamation has been done often, no one has ever tried what we’re trying, which is to create an integrated landscape, where you have rolling land with wetlands in the low areas and uplands.

“There is nothing there now but sand, so we’re starting from zero,” he said. “To me, this is a tremendous challenge and on a scale that most researchers don’t even think about.”

Syncrude chose Vitt for the project because of his expertise in peat, an organic material formed in wetlands where plant matter builds up faster than it decays. Vitt has studied the material all over the world, and peat will play an important role in the experimental work in Canada.

The project began last winter, Vitt said, following the Alberta government’s order that mining and oil and gas companies would have to start recreating landscapes that are similar to what was there prior to their operations. The order sets the bar higher than simple reclamation, which typically mitigates mining sites by seeding plants and grasses in those areas and making it suitable for wildlife.

While it now consists of sandy pits, the miles-wide area where the project is based once included about 40 percent organic soils and peat prior to the mining operations, Vitt said. To reach the oil-rich sands, however, workers removed about 300 feet of soil, eventually refilling the strip with the sandy tailings from which they removed oil.

To make matters more complicated, the mining process also leaves the remaining sands with a high saline content. The sand tailings are “like quicksand,” Vitt said, making it difficult to use heavy machinery.

Vitt and his two SIUC graduate students must find a way to rebuild the organic dynamic that once existed at the site and find plants that can thrive there as well.

To do this, Vitt is working with engineers who are creating a topography that includes upland areas that drain into a wetland area below. They also are helping Vitt bring in peat of various types to a series of 200-square-meter test plots he is using in the area. Specially modified backhoes build beds of peat up to a meter thick that will serve as the organic base for the new landscape.

Vitt’s research will examine what works best in regard to peat depth, age, the timing of its movement, the salinity content and its compaction. He also will take physical and chemical measurements of the peat to determine its status. He essentially will look at how one creates a peat land from scratch, whether you need peat to make peat or if simply growing plants from peat areas in mineral soil is enough to start one off.

The multimillion-dollar project includes Vitt’s work, which he conducts on site and at SIUC’s phytotron. The phytotron is essentially a climate-controlled greenhouse near the Life Science III building on the SIUC campus where doctoral student Rose Bloise and master’s student Sara Koropchak are working with the seeds of potential residents of recreated landscape.

“We’re sure plants will grow but are uncertain of the types,” Vitt said. “First, you have this salinity problem and you’ve got sand and you want to put organic soils on it. We need to look at the plants and find out how to propagate them and what their tolerances are.”

Last fall, the team collected 15 types of seeds from the area and is germinating and growing them under various conditions in Carbondale. It also is working with a commercial greenhouse in Alberta to mass-produce the seeds they identify as having the best potential. The plants are a mixture of sedges, shrubs and some wetland trees, which together could provide for a diverse horticultural mix on the recreated landscape.

Koropchak is looking at what Vitt considers a key foundational sedge species that would serve as the area’s most abundant plant.

“Oil and energy is in the news so much and it’s really cool to be a part of trying to fix these problems that are involved,” she said. “It’s been a great experience as a graduate student to work with industry on this project.”

Bloise said she hopes to work in the energy sector after earning her degree, as companies continue improving reclamation efforts.

“They need scientists to help reclaim the land,” she said.

The group will examine the peat test plots this summer and may elect to begin testing plants soon after. In the meantime, they will continue studying the plants at SIUC and working with Syncrude engineers up north to rebuild the natural environment that existed prior to the operations.

“No one ever tried to reassemble plants into a community, so we’re excited about what we will find,” Vitt said.